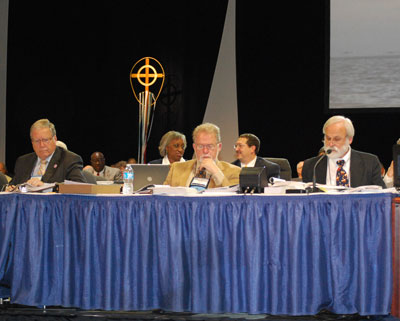 Monday began with morning prayer and then right into the plenary session. The morning plenary began by dealing with agenda items and passing 9 consent calendars. The body then moved onto a request that was brought by the Council of Bishops.

The conversation on the floor was heated and split between those who had sympathy with the request and those who believed it was creating a new executive officer for The United Methodist Church. While Bishop Goodpaster, the outgoing president of the Council, assured the conference that the non-residential bishop would have no additional powers beyond that of the current part-time president, delegates worried that this office would obtain new powers. This was a special concern for non-US delegates, who spoke with passion against the measure. In the end, the measure had a majority of the votes cast, but could not obtain the 2/3 needed to approve a constitutional amendment.

A proposal was made to move from the system where bishops are elected to the episcopacy until their retirement to a system where an Episcopal term would be eight years with the possibility of one re-election. Initially the item had received the required 2/3 votes in the legislative committee but had received the required twenty signatures to be pulled from the consent calendar and brought to the floor. After debate on the floor, the proposal did not have the required 2/3 votes to become a constitutional amendment.

Jan Love, Kasap Owan, William J. Abraham and Dr. Bill T. Arnold, a clergy delegate from the Kentucky Conference, were elected to the University Senate. The University Senate is made up of 25 voting members who at the time of election are actively engaged in the work of education at an educational institution. The four will serve four-year terms.

The order of the day was a celebration of Higher Education. After a presentation during the afternoon plenary session, a choir from Africa University took the stage and then literally took delegates, bishops and visitors to a reception one floor down as they led a musical procession through the hallway, down the escalator and into the reception.
The choir of Kentucky Wesley College was one of the featured choirs that sang during the reception. The choir decked out in tuxedos and long dresses was one of the most nattily attired and also one of the most well-received choirs.  The crowd surrounded the stage and clapped and moved in time with the music of the choir.

The night ended with the evening worship service titled "Embark". The night was hosted by Dr. Larry Hygh and Bishop David Kekumba Yemba preached the sermon.

Celebration of the mission and ministry of the UMC. Photo by Cathy Bruce.

Technically delegates had Sunday as a day of rest, but there were many activities for the delegates to engage in.  Many of the bishops were scheduled to speak at various UM churches throughout the Tampa area.

Rev. Debbie Wallace-Padgett, clergy delegate from Kentucky and an Episcopal candidate, spoke at the spirited COSROW  (Commission on the Status & Role of Women) 40th anniversary celebration.  Along with Wallace-Padgett, the message was delivered by two other elders, Pamela Lightsey and Carmen Scheuerman.

The evening plenary session, "We Need a River":  A Plenary Celebration and Challenge of the Mission and Ministry of the United Methodist Church, began with announcements concerning the calendar and agenda for the upcoming week.

Then we were called into a spirit of worship by song "We Need a River, Come to the Water." Afterwards we began to hear the wonderful stories of mission work throughout our connection: celebrating one hundred years of the Girl Scouts , whose first troop met here in Tampa at the Hyde Park UMC; stories of how our Four Areas of Focus have had an impact, such as building Urban Village, a new church plant in Chicago, that has built a "church" that is "people focused and not property focused";  celebrating the 20th anniversary of the Communities of Shalom a movement that grew out of the civil unrest that resulted after riots that ensued in 1992 in Los Angeles and many other missionary endeavors.

Read the latest news from General Conference 2012 by clicking here. 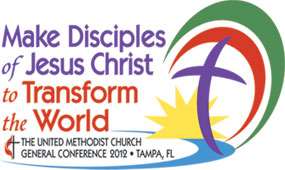