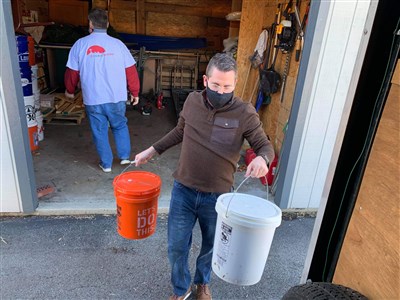 The Kentucky Annual Conference has received a $10,000 grant from UMCOR, the United Methodist Committee on Relief, to assist in the response to destructive flooding in Eastern and Southeastern Kentucky.

The funds will be used to defray the expense of moving supplies and with meeting some immediate needs identified by district or local churches, said Jim Morse, the Conference’s Disaster Relief Coordinator. The money will serve as a stopgap until in-Conference donations can arrive, he added in an email.

“Disasters are not budget items and the initial response cost are often a struggle for a Conference to cover to be able to have a prompt response,” Morse wrote. “This is why UMCOR has for years made these type of grants available to Conferences. They can do this because of the faithful support United Methodists have given to UMCOR throughout the years.”

In a separate email update sent to Conference pastors and lay leaders, Morse said that as of Friday morning, there have been a total of 64 formal emergency declarations in Kentucky – 44 counties and 20 cities.

Conference disaster-relief volunteers should be able to start distributing cleaning buckets and health kits from a UMCOR shipment this coming Monday. David Pratt, the Disaster Response Coordinator in the Bluegrass District, will be the coordinator, with Morse backing him up as needed.

The flooding from snow and ice melt and recent heavy rains is some of the worst the region has seen in recent years. The Conference’s Kentucky East District and South East District have been especially hard hit.

In addition, the death of a 40-year-old woman in Martin County is being investigated as flood-related, according to the Lexington Herald Leader.