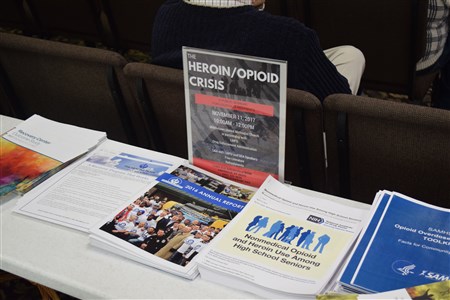 After police and substance-abuse experts spent more than 90 minutes citing facts, figures and statistics at a symposium at Middletown UMC addressing heroin-opioid use, Kristin Bieckert put a very human face on the public-health crisis.

Ms. Bieckert, a 24-year-old Louisville native who granted permission to use her full name in this story, related a horrific tale of life with a mother and father who were addicts, who brewed methamphetamine in their home, and who passed along that legacy to their daughter.

“Alcohol and drugs were like normal to me. I thought everyone did it,” said Ms. Bieckert, who said she has been addicted to various drugs including heroin and alcohol herself since she was 11. She tearfully related her past, which includes multiple overdoses and giving birth to two children, only to see them taken from her because of her chronic substance abuse.

When first responders would resuscitate her, she said she would curse at them for saving her life – because at that point, she would have preferred to die.

She’s tried to get clean seven times. She has been at The Healing Place since December 2016 and is coming up on one year of sobriety. “One day at a time, and that works,” she said.

The audience at the symposium was riveted as Ms. Bieckert told her story. When she finished, they gave her a standing ovation.

About 50 people attended the two-hour public symposium at the church on Saturday, Nov. 11. Ms. Bieckert was the final presenter. The panel included Louisville Metro Police officers and representatives of the Louisville Metro Department of Public Health and the federal Drug Enforcement Administration. They painted a generally grim picture.

“I’d like to tell you we’re winning the war on drugs. I can tell you that we are treading water,” said Sgt. Tom Schardein, of the LMPD Narcotics/Intelligence Division. Among other things, that means considering fresh ways to fight. These days, first responders are more inclined to take addicts to treatment facilities such as The Healing Place rather than jail, he said.

Heroin and opioid abuse has exploded across the country in recent years, and Louisville and the rest of Kentucky are no exceptions. Furthermore, it’s not just an inner-city problem.

“If you think there’s a ZIP code in Jefferson County that isn’t affected, you’re kidding yourself,” said Sgt. Schardein, who presented several PowerPoint slides detailing the crisis during his portion of the symposium.

Officer Erik Velten, LMPD’s safety coordinator, was directed by Chief Steve Conrad two years ago to put together a training program for officers to provide emergency treatment, including Narcan, to victims of overdoses. Police often arrive at emergency scenes before ambulance crews, so it made sense to give officers the means to help victims, he said.

Through Nov. 9, Louisville police in 2017 had treated 430 people for overdoses, Officer Velten said, and many of those needed multiple doses of Narcan, which generally is administered as a nasal spray.

Each dose costs taxpayers $38, but that’s cheap compared with the cost of having to care for victims who suffer permanent brain damage, said Officer Velten, who also is an emergency medical technician.

Matt LaRocco, of the city health department, said addiction should be treated more as a public health issue than a criminal matter. “We’ve had a war on drugs for about a hundred years, and we haven’t had a very good outcome,” he said.

Another challenge, in Kentucky and elsewhere, is to make sure physicians aren’t overprescribing narcotic painkillers and inadvertently getting patients hooked, Mr. LaRocco said. Certain personal characteristics can make people more susceptible to succumbing to addiction, but doctors rarely take them into account when prescribing painkillers, he said.

The symposium was coordinated by Nancy Tinnell, associate pastor of discipleship at Middletown UMC. In an interview afterward, she said it was organized as part of an effort by the church to address a growing need in the community. The church, which already has a Celebrate Recovery program, is preparing to launch a branch of Families Anonymous on Dec. 12 at 7 p.m. It’s designed to help families cope with their loved ones’ addictions.

Rev. Tinnell also said that a similar symposium designed for Kentucky Annual Conference pastors will be offered in January, at a date and location to be determined. Pastors will be able to earn continuing education units for attending, she said.

View photos from the symposium