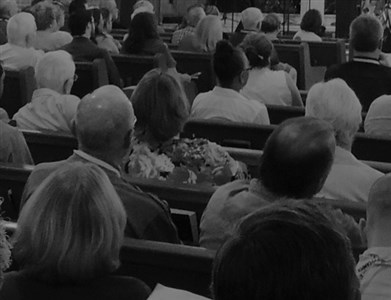 During the recently concluded Holy Conversations meetings held across the Kentucky Annual Conference to talk about human sexuality and the future of the United Methodist Church, one moment particularly stands out to Bishop Leonard Fairley.

While Rev. Julie Love, the conference’s director of Connectional Ministries, was addressing the crowd, a man stood up and interrupted her, starting to ask a question – which went against the agreed-to meeting format.

The bishop quietly walked over to the man, gently put his arms around him and said he would be happy to have a conversation with him, right then, at his table. So they did, quietly, while the meeting proceeded.

A hard moment, while discussing a hard topic, was quickly defused.

Afterward, the man came up to the bishop and apologized for interrupting the meeting, thanking him for taking the time to talk one-on-one.

“That left a big impression on me,” Bishop Fairley said. “In the heat of passions as people have concerns, a sense of calmness can prevail.”

About 1,500 people from the KAC’s nine districts attended the Holy Conversations meetings held over the past few months. They were conducted by the bishop and Rev. Love to update clergy and laity on the Commission on a Way Forward’s work to craft a plan ahead of a special General Conference vote next February on whether to change church policy relating to LGBTQ people.

“Overall, I think we had a great turnout,” Rev. Love said. But she expressed concern about who was not present – younger and more ethnically diverse people. In every district, the attendees tended to be middle-aged or older. “So we need to find ways to hear more diverse voices, as well,” she said.

The meetings were structured to allow a time of devotion led by the bishop, followed by a series of questions about sexuality and the church for small groups to discuss at their tables. Then at the end, each district superintendent led a time of intentional prayer.

At its recent meeting in Chicago, the Council of Bishops recommended that the General Conference embrace the One Church Plan. (A brief description of each of the three plans is appended to the bottom of this story.)

Rev. Love said her takeaway from the nine district meetings was that people love the United Methodist Church but have concerns about its future.

The mood of the meetings was respectful, she said. “I think there were tensions,” but the intentional prayer time at the end of each session was well-received. Bishop Fairley urged people to address the hard questions and, facing disagreement, to do so in a loving, Christian way.

Many people left the meetings feeling hopeful, but some left frustrated at the lack of details in the options for the church going forward. All, including the One Church Plan, are still basically sketches with details yet to be worked out.

“I understand that frustration – I share it,” Rev. Love said. “People want to know exactly what’s going to happen, and we don’t know.”

She also said the sketches changed during the three or so months that the meetings were held, so districts received varying reports depending on the commission’s progress and emphasis at any given moment.

Heartland Conference District Superintendent Gary Gibson said he was pleased and encouraged with the meeting in his district, held in February at Christ UMC in Louisville. Nearly 300 people attended.

He said he talked with a few of the table leaders after the meeting and received positive reports.

“You could just feel the tension going down during the prayer time, and people left feeling much better,” Rev. Gibson said.

Rev. Love said a next step is for the Kentucky delegation to the special General Conference to meet in the coming months.

Bishop Fairley and Rev. Love also said people are also strongly encouraged to take part in the Council of Bishop’s partnership with The Upper Room in a time of intentional prayer to seek the Holy Spirit’s guidance and blessing leading up to next February. Complete information can be found at: http://www.umc.org/who-we-are/bishops-the-upper-room-launch-phase-3-of-praying-our-way-forward.

Rev. Love said she, the bishop and other KAC leaders will also look for opportunities to continue conversations over the next few months.

Rev. Love was one of 32 members of the UMC’s Commission on a Way Forward, which met regularly for the past year in an effort to draw up an acceptable recommendation for the General Conference to vote on next year. Its three sketches were sent to the bishops, who spent a week together in early May to determine their recommendation.

“It was the hardest leadership work I’ve ever done, but it was an incredible experience,” Rev. Love said of the commission. “Some of the members have become lifelong friends. And I can honestly say I’ve never been more prayed for.”

Rev. Love said she has been asked by three other conferences to speak about her work on the commission.

Bishop Fairley said the recent meeting in Chicago was a powerful time of prayer and discernment. The bishops have declined to release the final tally but have said support was expressed for all three plans.

“I could tell every bishop in that room had slept with that issue (the future of the church) for years,” Bishop Fairley said. He also declined to say how he voted but added that he fully embraces the council’s decision to recommend the One Church Plan because the bishops made the decision in covenant relationship and stand by the covenant they made.

The bishop said that despite the hard topic, the Holy Conversations across the conference left him with a sense of peace.

“It was a reminder from God that the church has never belonged to us. It was given to us as the great gift of Jesus Christ – and regardless of what we say, think, or do, it will remain.”

THE THREE PLANS
Here is a brief description of the three plans submitted to the Council of Bishops by the Commission on a Way Forward:
MORE INFORMATION
For complete and updated information about the human sexuality debate, go to: http://www.umc.org/who-we-are/commission-on-a-way-forward-news-and-updates.