Worshipful AC closes with moving service of sending forth 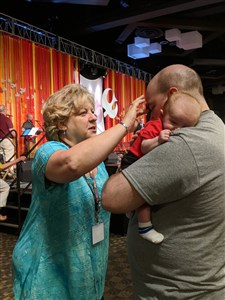 COVINGTON, Kentucky – The 2018 Annual Conference ended late Wednesday afternoon with the Sending Forth and Anointing Service.

In his call to worship, Rev. Brandon McGinnis called on the Lord to be with the clergy being sent forth.

“The sending of our sisters and brothers to serve and lead the church strengthens our bond of communion among those local churches and extension ministries to which they go to live out their call,” Rev. McGinnis said. “The praises, prayers, and blessings we offer in this celebration are an expression of that communion and the ties that bind us together as one.”

The theme of this year’s Annual Conference was “Leading with the Holy Spirit,” and a number of people who attended the three-day conference at the Northern Kentucky Convention Center said it achieved its goal. And no one was more pleased than Bishop Leonard Fairley.

“I thought it went well. The Holy Spirit was indeed with us. You could feel it,” he said in a short interview after the sending-forth service.

A petition by two Northern Kentucky District churches concerning the church’s discussion of human sexuality was withdrawn at the last minute just before the afternoon plenary session began.

The petition had called for the Annual Conference delegates to instruct the Kentucky delegation to the 2019 General Conference to vote for the Traditionalist Plan, which would keep the current wording on LGBTQ policy in the Book of Discipline.

In other matters, seven churches across the KAC were approved to be closed. The Annual Conference budget was also approved.

At the morning plenary session, the conference voted on a correction to a constitutional amendment that was previously voted on in 2017. The amendment concerns discrimination against women and girls.

No vote was announced since other conferences also must also vote on it again.

The bishop also announced that the Mission Offering for campus ministries raised $102,597 Tuesday night – and that someone handed him a $150 check Wednesday to be added to the total.

The room erupted in delighted applauses after hearing the total, and the bishop also was pleased. “I just want to say a word to the conference: You bless my soul.”

Several award winners were announced during the morning and afternoon sessions:

The Denman Awards: Rev. Brad Shuck of Redemption City in Dawson Springs, and Katie Gerber, a youth member of Middletown UMC. Broadway UMC in Bowling Green and Christ UMC in Louisville were honored for each having 57 professions of faith in 2017.

“Thirty youth and young adults represented the nine districts well at Annual Conference,”  Nathan Calvert, the conference’s associate director of ministry with young people, said in an interview after the final plenary session.

Their job was to be the young voice of the laity, Mr. Calvert said.

One change this year was having the youth stay in hotels near the convention center instead of on nearby college campuses, he said. “This has allowed us to feel more a part of the conference community.”

Bishop Fairley announced that next year’s Annual Conference will be June 10-12, again at the Northern Kentucky Convention Center in Covington.