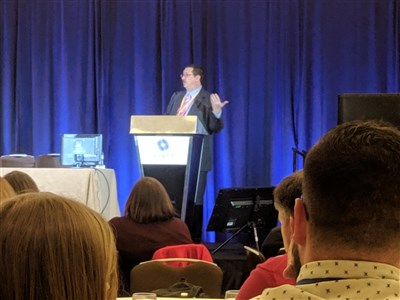 ST. LOUIS – Delegates from across The United Methodist Church began to assemble in St. Louis  on Friday for the start of the called 2019 General Conference. Friday’s activities were centered around registration, getting acclimated to the Dome at America’s Center, and preliminary events that focused on the session.

“There seems to be an atmosphere of a big family reunion with lots of hugs and smiles,” said Rev. Jean Hawxhurst, one of the clergy delegates for the Kentucky Annual Conference. “Dear God, may it remain so.”

The called General Conference, only the second in the history of the UMC, will focus on a report from the Commission on a Way Forward and how the church will respond to matters related to human sexuality.

“We are in a very important place in the life of the church,” said Rev. Gary Graves, general secretary of the General Conference, during a keynote address to the United Methodist Association of Communicators.

Saturday’s opening session will focus on an intentional time of prayer for the church, its mission, and the called session. It is the culmination of the Praying Our Way Forward initiative, which sought to lead the UMC in a season of prayer prior to General Conference.

Bishops from the four regions of the world will take part in this time of prayer. KAC Bishop Leonard Fairley is among the bishops who will have a part in prayer time. His time of prayer is anticipated at 11:30 a.m. CST (12:30 p.m. EST).

Plenary work on the petitions before General Conference will be Sunday morning. Part of this time, Graves said, will include representatives from the Commission on a Way Forward introducing their proposals to the delegates.

From there, delegates will begin to rank the petitions based on priority. Graves said that the prioritization will help to schedule the order of when petitions will be heard when the entire General Conference will enter the legislative phase of work.

This year, the entire General Conference will sit as one legislative committee as it works through the petitions associated with the Commission on a Way Forward’s report and those deemed acceptable to the session’s call by the Committee on Reference. A total of 78 petitions were approved in January to be heard by the delegates.

“Everything must receive a vote,” said Graves.

General Conference will sit in the legislative committee on Monday, while the plenary session will take place Tuesday. The conference must end by 6:30 p.m. CST Tuesday to accommodate  another event.

As General Conference begins, one emotion many feel is fear. This is something Bishop Robert Farr, resident bishop of the Missouri Annual Conference, addressed during a morning worship service with members of the United Methodist Association of Communicators.

“We start with this fear inside of us, whether we like it or not,” said Farr while describing moments of fear within Scripture.

Because of that, Farr said many will use the emotion to influence how others respond to a given situation. This can take place, he says, in both politics and the church.

“They are all peddling fear in hopes of getting ahead of the other person,” Farr said.

During his message, Farr joked about praying for a massive snowstorm to force a cancellation of GC. That storm, though, would not allow the church to address what it needs to face in the week to come.

“We can either face it or flee,” Farr said. “It is time we face it and saddle up and ride in.”

Farr believes the church is able to handle the conversation because it has had special sessions in the past. He referenced Acts 15 and the story of the early church that gathered in Jerusalem to discern the role of Gentiles in the church.

Ultimately, though, Farr said the church should remember what this time is all about.

“Our message is not about ourselves,” he said. “We are proclaiming Jesus Christ, the master.”

As delegates began to prepare for Saturday’s opening session, pastors and lay members in Kentucky continued their work of praying and waiting for what would come out of St. Louis. Those in Kentucky can watch the proceedings online beginning Saturday by visiting umc.org/live.

Among those watching from Kentucky will be Rev. Jim Nichols, pastor of First UMC-Lexington’s Andover Campus. Earlier this week, Nichols posted on Facebook about his desires for the church to live in peace within this season.

“Ultimately, I’d like to see that this conference made room for the Holy Spirit to move in a great way,” said Nichols in an interview about what he would like to see come out of St. Louis. “At the end of the day, I’d like to see the church be in a position where we, at least, made headway so that we can get back to the mission of making disciples.”

That is also the hope of Lew Nicholls, a lay delegate and co-chair of Kentucky’s delegation with Rev. Bill Arnold.

“Don’t give up on the Methodist Church,” said Nicholls on what message he wanted to give those in Kentucky. “Either way, we are still going to be The United Methodist Church.”

Susan Cross, a member of Stovall UMC, spoke of her optimism as General Conference approaches.

“I am hoping that it will be a God-driven decision that will be well-received with grace for all,” Cross said.

Some remain cautiously optimistic about what will take place.

“We would love to see a resolution and an end to this conflict, so that we may all move forward together,” said Rev. Willard Knipp, pastor of Pikeville UMC.

Rev. Shannon Blosser is the pastor of Ogden Memorial United Methodist Church and a member of the Kentucky Annual Conference’s Communications Team.