ST. LOUIS – The special session of the General Conference on Tuesday approved an amended version of the Traditional Plan – an action that led to protests on the floor of the Dome of the America’s Center and in the stands for the remainder of the conference. 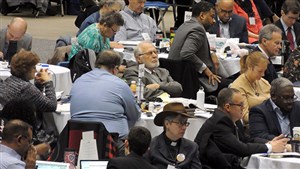 Delegates approved the plan, 438-384, with roughly 90 minutes left in the special session that was brought together to act on the report from the Commission on a Way Forward about matters related to human sexuality. Throughout the day, delegates faced a 6:30 p.m. CST deadline to conclude all actions before the General Conference ended because of  contractual obligations between The United Methodist Church and convention authorities.

The action also capped a hectic day as delegates sought to handle the business matters before the conference.

Following the vote, protests erupted on the floor and the dome with those supporting full inclusion of the LGBTQ community singing the refrain to “Blessed Assurance.” Delegates formed a circle throughout the convention center’s floor during this time, which also included a call-and-response chant.

Protests would continue throughout the session, including a group of people who made their way to the stage in an attempt to remove a cross.

“We saw the church at its best and the church at its worst,” Kentucky Bishop Leonard Fairley said to a gathered assembly of delegates and observers from the Kentucky Annual Conference and Red Bird Missionary Conference following Tuesday’s session. “But whatever place we have seen the church, it is God’s church. And God is still in control of the church.”

Lew Nicholls, co-chair of the KAC delegation, said it was clear people were passionate about what they believed. He did say the protests had consequences for the General Conference’s work.

“The disruptions were disruptive,” Nicholls said. “That disappointed me.”

One of the high points of the day was a request for prayer by Bishop Cynthia Fierro-Harvey, of Louisiana, before the vote was taken on the Traditional Plan. Harvey was the presiding bishop at 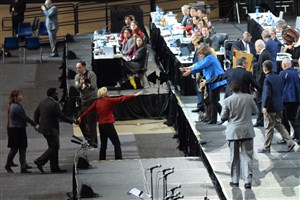 that time. When the prayer took place, delegates and the Council of Bishops joined together near the stage in a sign of unity.

Prior to taking up the Traditional Plan, which maintains the church’s current language regarding homosexuality, delegates had to act on a minority report from Monday’s legislative committee. The minority report centered upon the One Church Plan, which was supported by the Council of Bishops.

Rev. Tom Berlin, a supporter of the One Church Plan and a delegate from the Virginia Annual Conference, presented the plan to the delegates. He spoke about how the plan would seek to keep the church together, while recognizing the different contexts for ministry within the church.

“We don’t always see it the same way,” Berlin said. “We know that.”

Among those were young delegates who felt the church was leaving them out of the conversations about the future. A petition was shared on social media Monday by young adults calling on the General Conference to take up the One Church Plan. 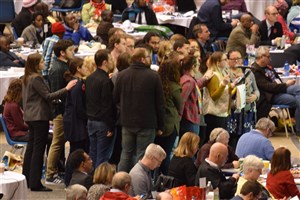 “We need a church that is still alive,” said Shayla Jordan, a young adult delegate from the Great Plains conference.

Toward the end of the session, delegates did approve a motion to seek a Judicial Council review of the Traditional Plan. The Judicial Council responded Tuesday to a legislative committee request and said many of the petitions were unconstitutional. The new review would take a look at the full plan, as well as amendments that sought to correct constitutional matters.

“I’m convinced legislation will not resolve this issue,” Nicholls said. “It was pretty apparent from what we saw today. It will only be resolved when people change their thinking.”

Delegates to General Conference did approve other measures that relate to how the church will respond to clergy and churches that may leave the denomination. The conference approved recommendations from Wespath on how to handle pension liabilities and clergy pensions. It also approved a minority report disaffiliation petition that deals with creating a process for churches  that may leave the denomination.

A petition to give Central Conferences more time to implement the decisions of General Conference was also approved.

All actions approved by General Conference take effect in the United States on Jan. 1, 2020.

Rev. Shannon Blosser is the pastor of Ogden Memorial United Methodist Church. He is a member of the Kentucky Annual Conference’s Communications Team.