AC Day Two: Missional offering: ‘Such an opportunity to bless them’ 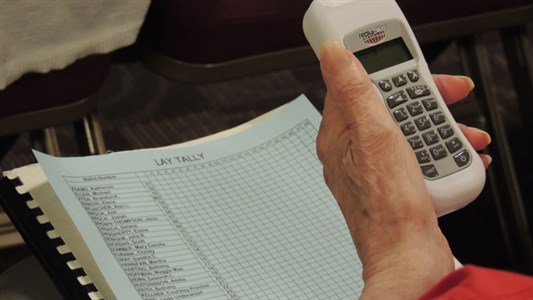 COVINGTON, Kentucky – The main hall at the Northern Kentucky Convention Center was rocking with the upbeat and enthusiastic sounds of the Buechel UMC Swahili Choir during Tuesday evening’s Mission Celebration service.

“We have such an opportunity to bless them,” Rev. Dr. Eric Bryant, Director of New Church Development, said as he urged the Kentucky Annual Conference delegates gathered to reach deep into their wallets and checkbooks to bless the missional congregations that will receive the 2019 Bishop’s Missional Offering.

“This is a time and a night and a moment when we really see what we’re all about: a chance to make disciples of Jesus Christ for the transformation of the world,” Bryant said.

The offering will be split among Grace Kids: A Church for Children in Louisville, Encounter Missions in Paintsville, and a new Refugee Fund that will assist refugee communities across the Conference in various ways.

“You’ve already blessed these communities just with the news of the mission offering coming tonight,” Bryant told the audience gathered in Exhibit Hall 1.

The service was the final event on the second day of Annual Conference. Wednesday will be the third and final day.

Electronic voting began in the morning plenary session on General Conference delegates. Results: The rest of the voting will be Wednesday. A total of five clergy and five laity, plus delegates for Jurisdictional Conference, which selects bishops, will be elected. An additional three people will be elected to serve as alternates.

After Tuesday’s plenary, Rev. Julie Hager Love, the Conference Secretary, said she talked with the people from Padgett Communications, the company providing the devices. Compared to other events the company has done, the KAC delegates are doing well, they told her.

“I think people are catching on to it well, and hopefully we’ll move through it nicely (Wednesday),” she said.

Padgett representatives went through a demonstration with delegates before the electronic voting began. Each clergy and lay member had a handheld device to use during the voting.

That included people at the convention center assembling health kits, coloring messages of love, writing encouragement notes, and sewing pillow cases; off-site projects such as painting and other outdoor projects; and two workshops, Tod Bolsinger in the large exhibit hall and Verlon and Melodee Fosner, Dinner Church pioneers who presented in the New Church Development workshop.

Holland said the official number was 668 people at 21 sites taking part in Church Beyond, but a number of people joined in who hadn’t signed up.

People were coming back with great stories to tell. “They loved it,” she said.

“That’s an impact,” Holland said. “That is touching lives and making a difference. That’s our church; that’s who we are.”

A total of 21 clergy were celebrated during the Retirement Service in the morning following the plenary session. The retirees are:

The day kicked off at 8 a.m. with Learning Time by author and educator Tod Bolsinger, author of “Canoeing the Mountains: Christian Leadership in Uncharted Territory.”

Bolsinger said that we must be committed to learning and acknowledge that it sometimes means losing something. The three hardest words to say are “I don’t know,” he told the gathering.

After the evening Mission Celebration service, Bolsinger met with the conference’s young clergy.

The early plenary session begins at 8:45 a.m. The Memorial Service for clergy and spouses who have died in the past year will be around 11 a.m.  More plenary work will follow lunch at 2 p.m., and the Service of Sending Forth is scheduled to begin around 4 p.m.

View all of Tuesday's pictures here.