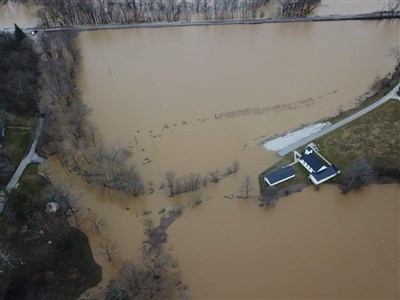 The Kentucky Annual Conference is reaching out to UMCOR to receive a shipment of cleaning buckets as part of the Conference’s response to devastating flooding in Eastern and Southeastern Kentucky.

The buckets should arrive in by the first of next week for distribution to local communities shortly after, said Jim Morse, the Conference’s Disaster Response Coordinator.

“The exact delivery point and then the distribution system will be worked out” Tuesday or Wednesday, Morse said.  He added that Bishop Leonard Fairley has also authorized Morse to apply to UMCOR, the United Methodist Committee on Relief, for a “solidarity grant” for seed funds to help offset the initial expenses of moving resources to meet immediate needs.

Morse added that “nothing in these plans should prevent churches from starting now to construct cleaning buckets locally for additional need or future need.” A number of pastors and churches in the afflicted area have already begun issuing pleas for flood buckets.

United Methodists in Kentucky are responding to severe flooding caused by the recent snow melt and heavy rains. As of late Monday afternoon, 32 counties in Eastern and Southeastern Kentucky had been formally declared disaster areas, and the list is expected to grow, Morse said.

Morse provided detailed instructions on how United Methodists across Kentucky can help:

On the memo line please put the following: KY Disaster Response #200902
(The Extended Cabinet is planning to make a financial donation to assist the flood-
stricken areas, and Conference staff members are also being invited to donate.)

Flood buckets for the immediate crisis will be provided primarily through UMCOR. Morse stressed the importance for pastors or other church leaders in affected areas to communicate any needs for supplies and assistance through district disaster responders “to provide the best overall response with the least duplication of effort and duplication of resources.”

Morse added: “Local churches should be in communication with local government, first responders, and other denominations in their community when making request for assistance. Know what is being done locally and by your neighbors. We are not the only player in this event and coordination must start on the local level.”

He also said to be specific in any requests: “If it is for flood cleanup buckets for your community, how many?  Where should they be delivered or where can they be picked up?”

Morse said early efforts by UMC teams have already begun, but this is just the beginning. The consensus of emergency management agencies and volunteer organizations is that the 32 counties declared disasters will increase, particularly since the forecasts for river crests will extend into late this week. He added that “forecasts are also calling for record or near record flood levels in many areas.”

“Local churches and districts are assessing the scope and potential needs,” Morse wrote. “We are working to move an additional 200 cleaning buckets eastward by the end of the week. Coordination with Southern Baptist Disaster Response could provide access to additional supplies in the Ashland/Boyd County area that are already on hand.”

As of late Monday, Morse said, there were reports that most roads in Owsley County were impassible because of high water and some areas may be days from accessibility.

As of midday Tuesday, there were no reports of any deaths or injuries from the flooding or resulting mudslides, although first responders had conducted numerous water rescues across the region, according to various news reports.

Morse stressed that the flooding and its aftermath will be a long-term event, complicated by COVID-19. Current and future volunteers will need to assess their comfort level; some may want to wait until after they have received the vaccine before they become part of a work crew. Morse will be distributing information later in the week about volunteer responses and relief efforts.

He also will send out information about organizing “volunteer navigators” in the local churches to assist in damage assessment once it is safe to travel to the afflicted areas.

Shopping list of items to assemble a flood bucket. This list is on Amazon but items do not have to be purchased from Amazon.

Check back to the Kentucky Annual Conference website or watch for further emails for additional information and updates on the flooding and our response.