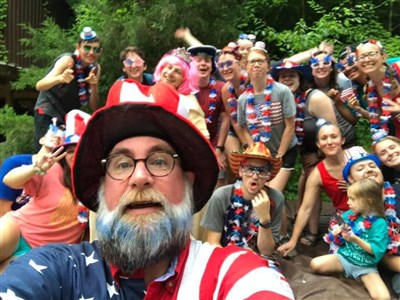 Aldersgate Camp & Retreat Center’s motto is “welcome home.” But for Dave Cohn, the camp director since 2013, “welcome home” is about to have a different meaning.

Cohn, director of the camp in east-central Kentucky for nearly nine years, is leaving to become director of Holston Presbytery Camp and Retreat Center in Banner Elk, North Carolina. It’s not quite home – he is a native of Roswell, Georgia – but he soon will be just a few hours’ drive from his elderly parents.

Despite the new opportunity, and a chance to return to his Presbyterian roots, Cohn’s upcoming departure on Dec. 10 is bittersweet.

“It was surprisingly difficult,” Cohn, 49, said in a Zoom interview Tuesday, Nov. 16. “I love Aldersgate. We’ve been here nine years. We’ve done so much and feel so blessed by this ministry.” 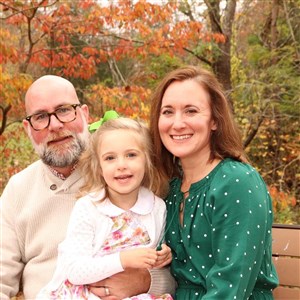 Cohn, who’s in his 29th year of camp and retreat ministry, said he and his wife, Laura, also are looking forward to a more convenient schooling option for their 5-year-old daughter, Grace. Right now, that involves a 40-minute drive; in Banner Elk, she will be just 2½ miles from school. Banner Elk is in the Blue Ridge Mountains of western North Carolina, about 30 minutes from eastern Tennessee.

“We have been extremely fortunate to have Dave as the Director of Aldersgate,” said Rev. William Moore, Director of Connectional Ministries for the Kentucky Annual Conference. “He has facilitated thousands of kids and adults in experiencing the love of Jesus and has helped them fall in love with God’s creation. He has also prepared and positioned Aldersgate for a fruitful future. He will be missed.”

‘We are sad to lose a good guy and a good friend,” said Warren Hopper, Executive Director of the Conference’s Camp & Retreat Ministries, noting that Cohn is “a jack of all trades and has been willing to do whatever it takes to make camp successful,” whether that’s directing, programming, cooking, cleaning or performing maintenance.

“He has addressed several big needs for Aldersgate and tackled projects that needed to happen, such as replacing the iconic bridge, the barn, the camp signs and several other things,” Hopper added.

Rev. Michael Sweeney, Chair of the Camp & Retreat Ministries Team, said: “Dave has become a very close friend of mine, and I am excited about his future at Holston for him and his family. Dave really has brought Aldersgate to a place where it can succeed into the future. He is leaving Aldersgate in a better financial position than when he arrived and has overseen many updates to our facilities.”

Those physical improvements are also some of the most satisfying accomplishments Cohn listed as he looked back at his time at Aldersgate. He noted that the camp has developed a working relationship with the Red Bird Missionary Conference, renovated and repaired several buildings, built a new cabin and cleared space to build a second cabin (both air conditioned and heated, allowing year-round use), updated the bathhouse, and assembled the Creation Sensation Outdoor Classroom.

“Just being able to get things done has been enormous,” Cohn said.

But even better than the investment in facilities has been the investment in campers. More than one child has arrived for summer camp on Monday in tears from homesickness, only to cry again on Saturday because it’s time to go home, Cohn said. Watching the camp counselors and how they grow in their own faith journeys is also extremely rewarding, he said.

Cohn said the most challenging part of his Aldersgate tenure has been the COVID-19 pandemic the past two years. Aldersgate and the Conference’s other remaining camp, Loucon, were both shut down during summer camp season in 2020 and were able to resume camp in 2021 with safety protocols in place. (A third camp, Kavanaugh Camp & Retreat Center, also was shut down by COVID-19 and has since been permanently closed by the Conference.)

Cohn said COVID-19 required Aldersgate to reduce staff, meaning he had to take on additional roles. That said, it was a real blessing to be able to have summer camp again in 2021 – with zero cases of COVID-19.

Seeing the kids and how they responded made him recognize that “we needed to have camp. They were starving for camp,” he said. Depending on the state of the pandemic, he is cautiously optimistic that summer 2022 camp will look relatively normal.

Regarding Aldersgate’s iconic motto, Cohn recalled that when he interviewed for the job, he saw the “Welcome Home” sign coming into Aldersgate and realized that it was similar to the friendly nature he was accustomed to in North Carolina. (At the time, he was at Camp Grier in McDowell County, North Carolina.)

Seeing the sign at Aldersgate, he felt called to serve there. “We just kind of felt like God was opening that door for us,” Cohn said.

Hopper has his own memories of Cohn’s job interview:

“During Dave's interview and tour at Aldersgate, it began to rain, and he was given a broken umbrella,” Hopper recalled. “He made the most of it. We often joke about the unintentional umbrella interview assessment, but the reality is it has defined his ministry. Often, he's been handed a broken umbrella, but Dave has continually made the most of it and given his all despite getting wet through the process.

“He's been a trouper and what Aldersgate has needed. He will be greatly missed.”

For his part, Cohn said that as Aldersgate prepares to start its 60th year, “I am excited for the Aldersgate Committee, Camp & Retreat Ministry, for the search team to see who is going to come in, and excited to see what that person will do.” He has no intention of interfering, but he wants everyone to know he is just a phone call away. “I know God is at work out here and there are some great things going on.”

He and his family feel blessed to have been part of the Conference and this ministry. “We’re going to miss that a whole lot.”


‘SEE YOU LATER’ RECEPTION
The public is invited to a “see you later” reception for Dave, Laura and Grace Cohn on Sunday, Dec. 12, from 3-6 p.m. at Andover UMC, 3801 Polo Club Blvd., Lexington. Cohn said he would love to see as many people as can attend. “It’s not ‘goodbye,’ it’s ‘till next time,’” he said.

It also will be a final opportunity for Kentuckians who bleed Wildcat Blue to tease Cohn, an avid Georgia Bulldogs fan, about his preferred college team. Hopper jokingly cited that allegiance as one of his few shortcomings.