Praise, gratitude in the midst of tragedy 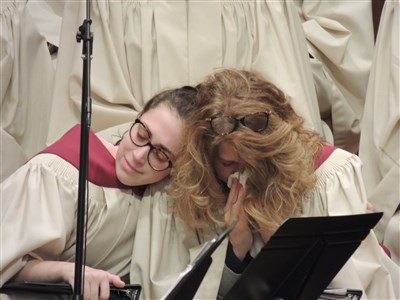 Some stories from Bowling Green and elsewhere about the storms and the outpouring of prayers and offers for assistance in their aftermath. (And we’re sure this is just the beginning.): 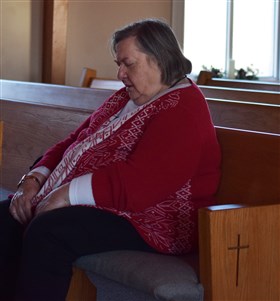 Rosemary Meszaros, a member of Broadway UMC in Bowling Green, who attended the 8:15 a.m. service Sunday at the Melrose Campus, is active in the Stephen Ministries, which pairs trained lay people with those in spiritual need to provide a listening ear.

Meszaros was staying Friday night at the home of Carol, an elderly friend who’d undergone outpatient surgery earlier in the day. They were largely unaware of the approaching storm until Meszaros heard the tornado alert siren, then the telltale freight train noise of the tornado.

Neither woman panicked. They prayed silently for safety, and the storm missed them by about two miles. But the house suddenly lost power. They wondered as the house grew colder if they should try to leave and find an emergency shelter but ultimately decided to stay put and just bundle up. The power came back on about 6:30 p.m. Saturday, after about 17 hours.

Meszaros, a retired Western Kentucky University librarian who moved to Bowling Green in 1998, was still waiting to re-establish contact with another elderly lady, her formal Stephen Ministry client. The lady lives in assisted living so was being well cared for, but Meszaros was looking forward to phone service getting fully restored so she could reach her firsthand.

“I grew up in New Orleans so I know hurricanes, and I lived in California, so I know earthquakes,” she said. “This is my first experience with a tornado.” 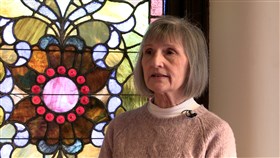 Cheryl Goodlad, a member of State Street UMC in Bowling Green, has firsthand experience with natural disasters predating the Dec. 11-12 tornadoes: She and her family had to flee New Orleans in 2005 when Hurricane Katrina ravaged that city and their home ended up with 4 feet of water.

They landed in the Bowling Green area and ended up staying. Goodlad lives in Franklin, about 20 miles south of Bowling Green near the Tennessee border.

Natural disasters share some similarities, but also some differences. The biggest difference between hurricanes and tornadoes Goodlad cited is that with a hurricane you have days to prepare, unlike tornadoes when you might have only minutes’ warning. No time to pack belongings and seek safer areas.

“I found it frightening,” she said, adding that she told her daughter, “This is Katrina without the flooding.”

Asked to offer any suggestions for those who are reeling from property losses, she urged them not to try to do everything by themselves but to accept donations and other help from people offering it. She also said that people will need to prepare themselves emotionally for the damage to their property, and she stressed that it’s OK to grieve.

When she returned to her New Orleans house after two months, “I was not prepared,” she said.

As she drove into Bowling Green from Franklin for church and she saw some of the damaged areas, the tragedy hit home for her. Yet in the midst of pain, she also felt gratitude and Christ’s comforting presence.

Jennifer Dickinson, State Street’s Director of Discipleship & Missions, said after church that the staff and lay leadership were already mobilizing. Rev. Dr. Craig Tuck, the Senior Pastor, and the staff had spent Saturday reaching out to check on members. Several had badly damaged or destroyed homes, but no one was injured in the storm.

Relief efforts combined with outreach and ministry. One man from the church was planning to distribute bottled water to people in hard-hit areas, Dickinson said. Plus, the church bus was going to be dispatched to help shuttle people from        one shelter that was closing to another newly opened site. They also were working to make sure Room at the Inn, a local homeless ministry in which State Street participates, didn’t miss a beat.

Dickinson made it clear that the mission-minded church was just beginning to mobilize. “Right now there’s so many questions,” she said. “You look around and just wonder, where do you start?”

For his part, Tuck said that he ventured out early Saturday to survey the damage. When he and the staff started checking on congregants, they found it challenging because cell service was so sporadic. (It was still spotty Sunday, depending on the area of town.) The church staff had been using every means available to reach out: calls, texts, emails, Facebook posts.

The church itself was unscathed, which “gives me a great sense of relief,” Tuck said. “We could not have said that (Saturday).” Just a few blocks away, the damage was substantial, with some of the city’s stately older homes and 100-year-old trees destroyed.

As far as how he himself was coping, Tuck said it wasn’t so much a sense of helplessness as it was “a sense that this is bigger than we are.” He had high praise for his staff and lay members.

“I’m surrounded by a lot of good folks here.”

He said that early indications were that none of the churches in his district had been damaged – not even the ones in Bowling Green. 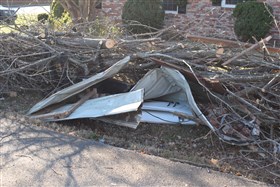 Rev. Caleb Wheat, Pastor at St. James UMC in Bowling Green – which was narrowly missed by the tornado – talked with us via text:

“Everything at our church is good, everyone is safe and well. We’ve had some members with property damage, and there are several other members that have a good bit of debris around them. But no one was harmed, and we thank God for that! We’ve been out today (Sunday) helping some of them with cleanup in the aftermath, and we distributed lunches to crews and volunteers as we were able to do so. Don’t know exactly what our continued work is going to look like, but … I expect we’re gonna be pretty busy because our church is in the middle of quite a bit of devastation. I hope we will, at least!”

At the Conference Office in Crestwood, calls and emails started coming in Sunday night and Monday from churches and individuals wanting to help or just letting us know that they were praying:

More coverage of the storms can be found here, including photos and video we collected Sunday in Bowling Green