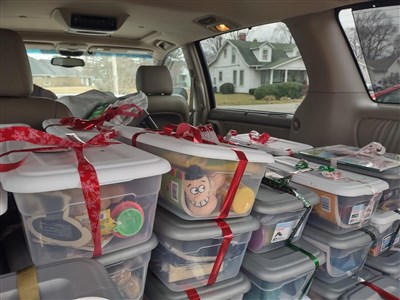 When 6-year-old Sam Riddell learned of the families who lost everything in the Dec. 10-11 tornadoes, he and his friends at Crestwood UMC decided they had to do something.

The Riddell family has close friends in Bowling Green, one of the communities hard hit by the tornadoes. Sam, the son of Kurt and Rachel Riddell, brought up the storms during Children’s Church on Dec. 12, and mentioned he had friends there, said Kim Tribolet, the Children and Family Minister at Crestwood.

Although the Riddells’ friends did not take a direct hit from the storm, other families were not so fortunate. So Sam and the others in Children’s Church decided they needed to help make sure the children who lost their homes and possessions had some toys for Christmas.

Tribolet and Courtney Garrett, the other adult helping with Children’s Church that day, told the kids they would find out exactly what the people in Bowling Green needed and would let them know, remining them that the next Sunday, the 19th, was their “Happy Birthday Jesus” celebration and that they might be able to do something then.

That apparently was not quite fast enough to suit the children.

“The kids were announcing it before we had formally made the decision, so it’s like, we’re running with this,” Tribolet said. “The kids want to do it, so we’re doing it.”

Tribolet reached out Dec. 13 to the Kentucky Annual Conference’s point person on disaster relief, Jim Morse, to ask him about needs. Then the word went out to Children’s Church families but soon spread to the rest of the church that they were collecting crafts, games, coloring books, and small toys. 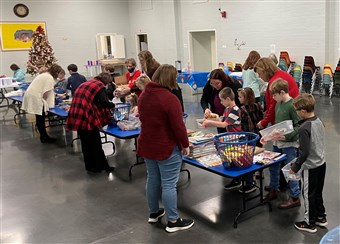 About 25 children, including Sam’s brother Jack, a fifth-grader, gathered Sunday during the Happy Birthday Jesus celebration. They set up an assembly line and had enough donated materials to fill 95 shoebox-size plastic activity boxes.

Tribolet said that just factoring in the families involved with children’s ministry, she was figuring on 40 to 50 boxes – but that was before the entire church got involved.

“I couldn’t believe how much stuff showed up,” she said.

Morse arrived about 12:30 Sunday afternoon to pack up the boxes in a van, then drove them down to Bowling Green on Monday morning. “They were gratefully received and will go to a hard-hit lower-income area of Bowling Green,” Morse said that afternoon.

Echoed Rev. Mark Dickinson, the South Central District Superintendent: “With these gifts, children in the BG area will be blessed. It will help them to know that they have not been forgotten.”

The Crestwood UMC Facebook page put up a post with photos from Happy Birthday Jesus that said: “Our Children are Awesome!” That’s not news to Crestwood’s Senior Pastor, Rev. Derek Robinette.

“I love to see how our children’s pastor and children are using their gifts to meet the needs of people in western Kentucky,” he said.