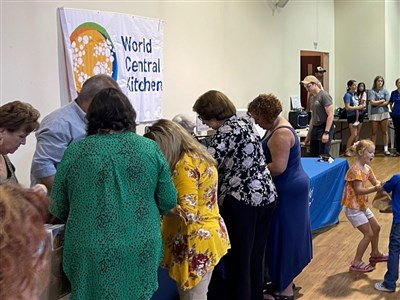 United Methodists in southeast Kentucky continue to serve on the front lines with other denominations as the region moves from emergency response to the rebuilding phase from deadly floods in late July.

Letha Patterson, a member of Bowman Memorial in Hazard, said the church isn’t large anymore and most of its members are older, so they don’t have the ability to be active in the rebuilding ministry, for instance. But wanting to do something, at least 15 church members at various times have volunteered at the old JC Penney store, which since the flood has been a distribution center staffed by volunteers – many of them from the multiple churches in the area.

“We’re not mighty, but we are trying to help in little ways,” Patterson said in an interview.

The volunteers help people with their shopping by accompanying them through the distribution center, she said  – a help since many of the younger families have small children in tow. Some of them still seem to be in shock, she said, and the volunteers encourage them because some seem fearful of taking too much.

The distribution center has volunteers of all ages, Patterson said – not long ago, she saw a third-grade boy folding towels, and many of the other volunteers are seniors, especially now that the high school and college students have returned to classes.

Bowman and Lothair served meals to hospital workers at the height of the COVID-19 pandemic, she said.

Rev. Peter Han, Pastor of Bowman and Lothair, said the emergency crews will come from the North Carolina Conference. They recently had a planning meeting and are waiting for the teams to arrive.

A lot of progress has been made since the flood in late July, but the rebuilding is just beginning. Patterson said many of the people who lost their homes are living in tents on their property either because they don’t want to leave or have no other place to go.

“This will be a long process to get everybody back or better than where they were to begin with,” she said. Fortunately, people are getting food and clothing now; basic needs are being met.

Ecumenical cooperation has also been a hallmark at Hindman UMC, which has been working closely with Pennsylvania-based Mennonite Disaster Service (MDS). Rev. John Street said Hindman is happy to have them there helping.

Among other things, workers have helped to repair the guest house behind the church known as the Lodge, which was damaged in the flood. The group has also had a presence at Camp Nathaniel, a few miles west of Hindman.

“MDS has been such a blessing. We were thrilled that they wanted to come and help,” said Linda Gayheart, co-coordinator of Hindman UMC’s disaster response.
Mike Stuckey, the Project Director for the Mennonite group, said volunteers have come from nearby Salyersville and from Pennsylvania The organization happily accepts members from all faith groups and traditions, he said. “That’s a beautiful thing.”

Jan Stumbo, who works with Gayheart on Hindman’s disaster response, said the immediate situation has improved to the point that the church has been able to reduce its hours of operating as a relief center.

Stumbo recalled another case of churches working closely together just a week and a half after the flood. On Aug. 9, a large supply of donated goods arrived from Georgia – a gift from 16 churches there of various denominations that got together, determined need, and sent assistance. Among them was a set of flood buckets provided by the Latter-Day Saints.

Street said downtown Hindman itself, which was heavily flooded, is cleaner than it was, but “we’ve still got a long way to go.” The Post Office has been “mucked and gutted,” but there’s still a big pile of debris out front, he said.

Most downtown businesses are still closed, Gayheart said, although the Community Trust Bank’s Knott County branch has just reopened. The courthouse is also open, she said.

The relationship between the Methodists and the Mennonites is tight. MDS Investigator Lou Erb said that when people come into an area, their hearts become attached to the people there.

Stuckey and Erb said they have noticed a shift the past week or so from cleanup and other emergency relief to inquiries about rebuilding. Erb also said she is concerned about people who are suffering from post-traumatic stress, including one of her friends.  “People are tired and exhausted,” she said.

Graceway UMC in Floyd County hosted Virginia-based Crisis Response International in the days after the flood. The nonprofit organization did cleanup work and later moved to neighboring Knott County to continue its work. 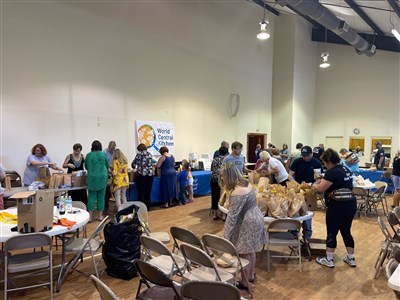 But Graceway’s major role in the flood recovery has been serving as a distribution site for meals from Feeding East Kentucky, which formed after the floods and worked with World Central Kitchen, which set up a hub in Hazard. Graceway has been heavily involved in helping to distribute meals, with one of the church’s organizers estimating they helped deliver 25,000 meals over a two-week period.

Many of the people involved came from different backgrounds, among them Baptists, Pentecostals, and Mormons. Graceway was involved in boxing and delivering many of the hot meals, sometimes two a day.

The large-scale food ministry is separate from a feeding ministry during which the youth and adult volunteers cooked meals at the church and then delivered them to anyone who needed them, Harlow said.

Patterson, the Bowman Memorial member, said churches will be important in helping to keep people from “falling through the cracks” as the region recovers from the floods.

“I feel like it’s going to be up to the churches to take care of things. The red tape may not be there, and churches can just pour out what they need to pour out” to help people.

We are looking for work teams of all skill levels, or anyone with a servants’ heart and a desire to be the hands and feet of Christ, to volunteer in the areas in our conference and The Central Appalachian (formerly Red Bird) conference that were affected by the flooding in July. Come get your hands dirty or help in some other way. To find out more information or register a work team, email us at disasterresponse@kyumc.org. We look forward to hearing from you!