The theme of the 2015 Kentucky Annual Conference was “Reach the World, Discovering Unexpected Joy in Giving.”

As part of our experiencing “Joy in Giving,” Bishop Davis and the cabinet issued a call for the churches of the conference to receive a special mission offering to benefit two ministries that are dear to the Kentucky Conference. The congregations heard the call and the Kentucky Conference collected over $81,000, which will be divided between the United Methodist Church’s Ebola response and the building of a high school in Belmopan, Belize.

The 2015 Kentucky Annual Conference opened with Shelby Street, President of the Youth Delegation, leading us into a time of worship.  Bishop Lindsey Davis delivered the sermon. His text was taken from Matthew 28:16 -20 and was titled “A Healthy Church.” Bishop Davis reminded us that, “"We are called to be salt and light in a world full of darkness.” And that the church’s mission is to be outward focused. Bishop Sandra Steiner Ball and Bishop Al Gwinn, along with district lay leaders and members of the cabinet, served communion.

Bishop Davis presided over the Service of Commissioning and Ordination. Bishop Sandra Steiner Ball of the West Virginia Annual Conference preached on the theme “Are We There, Yet?.” Father Jerry Riney from St. Stephen Cathedral in Owensboro, KY provided ecumenical representation. The service was full of the symbols of ministry: the towel and basin, the paten and cup, the water of baptism and the cross of Christ who calls people into ordained ministry. Clergy and family members stood in support of those being commissioned and ordained. There was one associate member recognized, two persons were ordained as deacons, one was commissioned on the deacon track, five were commissioned to be elders and five were ordained as elders.

During the Memorial Service, sixteen clergy and seven spouses who passed away during the last conference year were honored. Family and friends were invited to stand as each deceased person’s name was read. Bishop Al Gwinn delivered the sermon, reminding those in attendance to “never lose sight of the destination.” He reminded us that, as we live our lives, we each have an impact that will be felt long after we are gone.

The Missions Celebration featured the St. James UMC African Choir, and the mission offering went to continue to help build a high school in Belmopan, Belize and to the United Methodist Church’s response to the Ebola crisis. Rev. Denise Honeycutt, Deputy General Secretary of UMCOR gave the sermon on “Celebrate Your Call to Mission.” Rev. Honeycutt gave an inspiring and engaging sermon, and stated that, “Mission is not a project of the church; Mission is the very purpose of the church. Church, maybe it’s time for us to turn around and look out the window.” Dozens came forward to the Bishop’s call to mission and ministry, and prayer in support of those in mission. During our time together, we also had over 500 United Methodists participate at more than 23 service sites throughout the Bowling Green area during our Afternoon of Service. Projects ranged from visiting retirement homes to landscaping, packaging food packets, and prayer walks throughout Bowling Green.

In keeping with our theme of Discovering Unexpected Joy in Giving, Rev. Jorge Acevedo, the lead pastor at Grace Church (a multi-site, United Methodist congregation in Southwest Florida), presented the conference with three teaching sessions on Stewardship. Acevedo taught about the correlation between personal finances and stewardship. He shared his belief that most people would like to be generous and that generosity leads to a life of abundance. However, he also stated that “financial mismanagement is the thief that is robbing Americans of their ability to live abundantly.” In very practical terms, he addressed the conflict that arises from the coexistence of these realities. Ken Sloane, the director of stewardship for Discipleship Ministries also spoke on healthy stewardship and also presented an award from Discipleship Resources to Masonville UMC. The Church Health team shared news about their initiative to the conference.

In the business portion of conference, we heard reports from various ministry areas, including camping and retreat ministries, higher education ministry, and the Board of Ordained Ministry. Military chaplains were introduced and Bishop Davis offered prayed for their ministry. The 2015 Isaiah Project Interns were introduced as were the campus ministers. Kevin Stamps, pastor of The High Ground, was recognized for having the most professions of faith in the conference with 75 professions of faith within the past year. The late David Sparks was remembered for his ministry to youth and young adults through a video memorial. Jean Hawxhurst was given the Bishop’s Award for Ecumenism. The Denman Award for lifelong commitment to evangelism, for clergy, went to the Rev. Ben Hahn. Jan Stumbo was the recipient of the Denman laity award. Randy Coy, the chair of the Board of Pensions, recognized those clergy who have served in the conference for 25 and 50 years. The Preacher’s Aid Society made a $1,750 donation to the Clergy Crisis Fund in memory of Rev. Billy Glover, a longtime supporter of the Society. Rev. Jamie Brunk gave a moving testimonial about the resurrection of the church in West Liberty, Kentucky, following its destruction by tornado. Bishop Davis recognized Corbin District Superintendent, Farley Stuart for his election as a delegate to general Conference from the Redbird Conference, as well as his endorsement for the episcopacy by that same conference. Over $2,000 was donated to the Honduras mission trip by the conference attendees as a “bribe” to get Bishop Davis to wear a creatively-decorated cowboy hat! Randy Coy discussed the new healthcare plan for conference retirees and reviewed the current conference healthcare plan, including the upcoming tax regulation which will take effect in 2018. A prayer of thanksgiving was said for the ministry of the three churches that were closed this year.

The clergy and laity delegations to General and Jurisdictional Conferences were elected. As were three alternates. The delegations are as follows:

The 2016 budget was also voted on and approved. 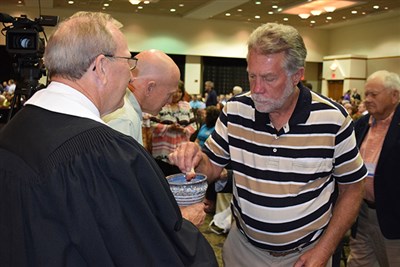