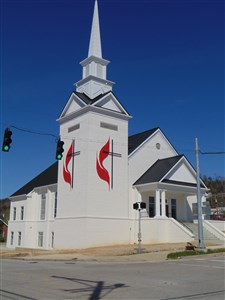 March 2, 2012 was the day when destruction and despair visited the town of West Liberty, toppling West Liberty UMC and its parsonage. That story has been shared many times throughout the conference over the past few years.

We have seen pictures of the steeple that crashed to the ground through the destructive force of an EF-3 tornado and we have seen pictures of pews sitting empty amidst the rubble. As a conference, we have grieved with our brothers and sisters who were mourning the loss of their beloved church building. As Christians, we remembered that the Bible says, “weeping may endure for a night, but joy comes in the morning.” We all knew that what had transpired on March 2, 2012 had brought about a night of weeping that would eventually pass; even so, the reality of so much destruction was difficult to bear. (photo gallery of tornado damage).

Emergency Management Department employee, Jim Gazay, now a member of West Liberty UMC, was not yet a member of the church in 2012. Jim clearly recalled the profound experience of working on the aftermath of this particular tornado. “Although I had worked other disasters, it is the first time I had worked a disaster at my home. I wasn’t a member of this church, we hadn’t joined, yet but I remember the bell lying out there in the road. It was heart-wrenching.” Another church member, Carolyn Lacy, reported, “I think everyone was shocked; we were totally traumatized because we had grown up with the mistaken belief that the hills would protect us from tornadoes.”

Hope
Although destruction and devastation were all around, the people of West Liberty knew that they would survive and be stronger for it. Sunday services resumed at the Morehead State University’s regional campus, located on the outskirts of town. In July of 2012, Rev. Jamie Brunk succeeded Rev. Ken Jett as the pastor of the church. As Rev. Jett had done before, Jamie continued to hold the congregation together, beginning the long process of planning and rebuilding the stately white church in the center of West Liberty.

In August of 2012, an Impact KY event was held in Morgan County, and the surrounding areas, to aid the towns that were damaged by the tornadoes. Bishop Lindsey Davis, and hundreds of volunteers, spent their Saturday working alongside the residents as they endeavored to put both their property and their lives back together. Many stories of faith and hope were shared that day.

Another tangible sign of the unwavering hope that the members of this faithful church had was the groundbreaking ceremony that was held in March, 2014 (photo gallery from the groundbreaking ceremony). Bishop Davis brought greetings from the conference and made sure that the people of West Liberty knew that "Methodists all over the state are celebrating with you."  After turning the soil, Pastor Jamie Brunk anointed the cornerstone of the new church with oil. At the ceremony, church member Lori Keeton observed that the event marked not just a new beginning for her child, "but for the other children of this church; this is their future and their church."

Triumph
On Saturday, July 11, 2015, the years of waiting, planning, building and praying culminated with the dedication service in the newly rebuilt West Liberty UMC. The current district superintendent, Rev. Terry Reffet, along with two previous district superintendents, Revs. Charlie Douglas and Paul Fryman, and with Bishop Davis, assisted in officiating  the service alongside Jamie Brunk. The Building Committee presented the building to be dedicated to the glory of God and to be of service to humanity (photo gallery of the dedication service).  Bishop Davis stated that the people should, “solemnly dedicate” the building for its “proper and sacred uses.” During his sermon, Bishop Davis offered words of assurance, promising that, “as this sanctuary becomes a house of prayer, a place of praise, a refuge for anxious and troubled souls and a platform for service to a hurting world, God will bless you. I guarantee you that.”

Near the end of the service, Brunk, along with Dr. George Bellamy, continued the tradition of using oil to signify the presence of the Holy Spirit. Rev. Brunk reminded the people of Jacob, who poured oil onto a rock, thereby rendering it an altar holy unto God. He also made reference to his anointment of a rock during the groundbreaking ceremony one year earlier. The anointing process was brought full-circle as he poured out oil once again, consecrating the new sanctuary to God. Brunk expressed his desire that, “the Holy Spirit will be present in peace and grace” in the new church building.