Kentucky & Red Bird’s Witness of Thanks 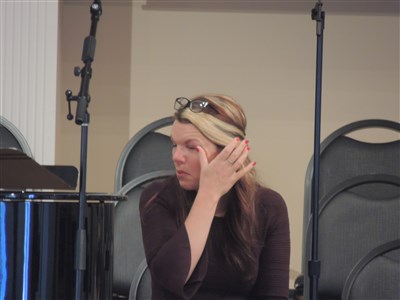 Testimonies often began with words like these:
“Giving honor to God, and to Jesus Christ my Lord and Savior, who is first in my life, I want to thank the Lord for waking me this morning with the blood still running warm in my veins.”

It was the Word becoming flesh, the scriptures becoming a living thing, not just words on a page to be debated or volleyed back and forth to prove one’s righteousness. Well, sisters and brothers in Christ, I want to testify today about the goodness of the Lord and how the Word has become flesh amid two devastating natural disasters in Kentucky:
December tornadoes in the west and historic July flooding in the east.

We the people called United Methodist in the Kentucky Annual Conference and Red Bird Missionary Conference can testify to the living scripture after conferences (including churches within Kentucky and Red Bird) have responded as the hands and feet of Jesus through UMCOR and individual gifts of financial and human resources on the ground. The United Methodist Connection has lived into Mathew 25 in extraordinary ways as people in congregations like yours have put aside their differences, if only for a moment, in order to make a difference.

Words cannot begin to describe or express the gratitude and heartfelt thanks for the generosity and sacrifices you have made on behalf of the people of Kentucky. We believe that it is true, that after others have gone, The United Methodist Church will still be there.

We give witness to the lived-out words of David Scott, who in his blog post titled, Posts from the Frontier: Connectionalism as basis for United Methodist Unity, writes: “According to connectionalism, the church is defined not by formal structures or doctrine or lines of authority. It’s defined by connections between people: connections between pastor and pastor, between pastor and laity, and between laity and laity.”

We have and continue to see this at its best, lived out in the ways each of you have responded to the “Macedonian Call” in eastern and western Kentucky. Again, giving honor to God and to Jesus Christ my savior who is first in my life, I want to thank God for each of you.

Thank you for allowing me to testify, but above all, to the people of Kentucky, THANK YOU for your prayers, encouragement, and support. We will need all these things and more in the days ahead. Thank you, Lord, for all your people.