Alvarez, other episcopal nominees visit with delegations ahead of voting 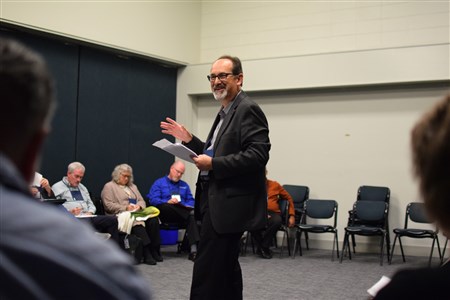 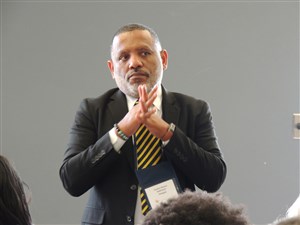 “I think it’s an excellent process. We’re getting a flavor of the whole jurisdiction. This gives you a picture of what it is to be a bishop for the whole church,” Alvarez said between sessions.

During the round robins, each of the nine episcopal nominees had 14 minutes with each delegation. One person in each group served as timekeeper.

Many of the questions in the various delegations were similar – questions about leading style; nominees’ beliefs on racial, ethnic and gender diversity; and, of course, thoughts on the church disaffiliation process under Paragraph 2553 of the Book of Discipline, and the UMC’s future in general.

Alvarez noted more than once that as a Black Hispanic immigrant from Cuba, he has both witnessed and experienced discrimination.

“We need to work together to see that we are one race – the human race,” he said during one session.

Alvarez, a former church planter who has devoted years to building bridges among different cultures, also repeatedly focused on mission, discipleship, and compassion – as well as a healthy serving of God’s grace.

One delegation asked him a question about the UMC in communist Cuba – a question that he said later surprised him but that he was grateful for a chance to address it. He told the delegates that the church in Cuba is isolated, making it especially important not only to preach the gospel, but to learn to build relationships as a precursor to making disciples. 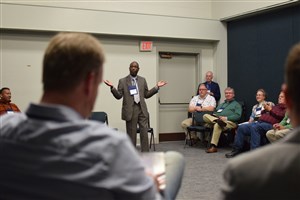 The Kentucky and Central Appalachian (formerly Red Bird) conferences hosted the nominees in a meeting room with the chairs arranged in a large circle. Rev. Sharon Bowers, a nominee from the Holston Conference, approved. “Oh, you’re in a circle – you’re my kind of people,” she said, drawing laughter.

The atmosphere in general seemed informal, with the candidates coming across as relaxed and conversational during their brief time with each delegation.

Bishop Leonard Fairley said later that he and the other bishops have been meeting and praying on behalf of all the nominees – and that the bishops want the nominees to know they are in their prayers – and that God has the church in God’s hands.

“All of us are hopeful for the future of the church,” Fairley said.