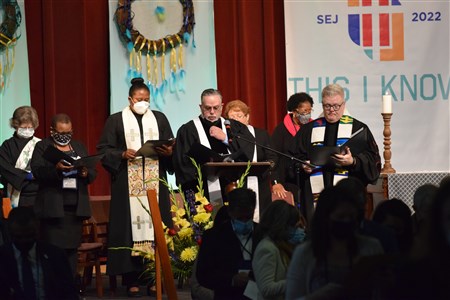 LAKE JUNALUSKA, North Carolina—Delegates, reserves, bishops, volunteers and members of the media filled the seats of Stuart Auditorium early Wednesday, Nov. 2, for the first day of the 2022 session of the Southeastern Jurisdictional Conference.

The morning began with a stirring worship service preached by Bishop James Swanson with a standing ovation and a call to remain a fearless church even amid anxiety over uncertainty, then a time for Holy Communion led by Bishop Debra Wallace-Padgett.

Business began as Swanson called the meeting officially to order at 10:39 a.m., with roll call, setting the bar, adoption of the agenda, and the day’s first major item of business: determining how many bishops to elect.

With overwhelming approval by hand vote, the body agreed with the Committee on Episcopacy’s recommendation to elect three bishops this year instead of the authorized five. The COE cited as their main rationale financial responsibility given the uncertainty over disaffiliation, noting two bishops would be asked to serve two areas until September 2024.

The first ballot, to vote on three episcopal nominees, was taken just before noon.

Swanson stated results would not be revealed until after a lunch break, as there were some write-in episcopal nominees beyond the nine nominees currently up for consideration.

Untroubled hearts
Opening worship began with a processional hymn, then a time of congregational centering, with the body facing first east, then south, then west, then north, as they prayed for guidance, purification and wisdom from the Lord. 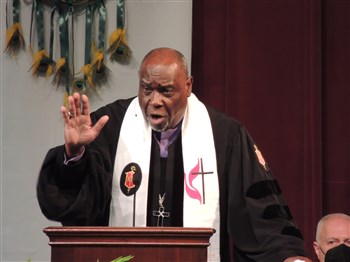 “Christ brings healing and celebration,” said Worship Coordinator Dr. Sam Parkes, reminding all that they comprise many families, but “all human.”

After a Scripture reading from John 15, on the vine and the branches, Swanson preached a powerful opening sermon on his key takeaway from that story: Without Jesus, we can’t do anything.

Just as the disciples back then struggled with anxiety over uncertainty, we too have uncertainly.

But even with all that is going on, “Don’t let your hearts be troubled, Southeastern Jurisdiction,” Swanson said. He noted that even the Avengers got worried and wondered if could defeat Thanos; it is natural to struggle with this.

Swanson said we often get too tied up in the things we want to see happen. Instead of allowing the Spirit to lead us to God’s vision, “We’ve already designed the church in our own image and likeness.”

We must understand from where our help comes, Swanson preached to resounding applause: Jesus.

“Forget your agenda,” Swanson said. “Stop for a minute and say, ‘Despite what I want, nevertheless—let your will be done.’”

Sacred grounds
Swanson, of the Mississippi Area, presided over the morning service, first calling on retired Bishop Richard C. Looney. Looney led the body in an opening prayer that emphasized the connection of vital local churches

After a reminder by Swanson of the importance of the mask requirement “out of utmost care and concern for each,” Conference Secretary Anne Travis came to the podium for roll call and quorum certification.

As she approached the podium, Swanson offered deep thanks at her stepping in to serve as secretary in the unexpected passing of Brad Brady, who was elected in September 2021 and served until his death this February. 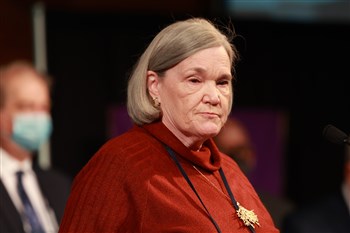 In a voice thick with unshed tears, Travis called for remembrance of and a moment of silence for Brady, as well as bishops and delegates who passed away in recent years.

Travis led roll call and set the bar of the conference, then established the agenda, noting their goal was to complete all balloting by lunch Thursday, Day Two of SEJ.

Next, Lake Junaluska Executive Director Ken Howle welcomed all to what he called “these sacred grounds” of Lake Junaluska, noting SEJ began meeting at Lake Junaluska in 1956.
He said Lake Junaluska was a neutral and uniting place of God, “a place where we can come together, put aside our differences and be in worship and fellowship together.”

Body to elect three bishops
Rob Martin then brought the report of the Committee on Plan of Organization and Rules of Order 2022, stating recommended changes include a revision to the number of members for the nominating committee and the tellers from a specific number that can fluctuate (currently set at 30) to the simpler two per annual conference, as conferences have merged and will likely to continue to do so. He also noted the name change from United Methodist Women to United Women in Faith.

Next, Bishop Sue Haupert-Johnson brought nominations from the Council of Bishops, noting that Julie Hager Love will step in as new SEJ secretary starting Jan. 1, 2023, and noted the secretary designate after 2024 would be Kathy James.

Travis then provided balloting instructions and led the body in a test vote.

Furr also introduced the COE’s recommendation on electing three instead of five bishops. He said their decision was not a quick one and involved looking at extensive data from the general church and the jurisdiction.

First ballot taken before lunch break
After a video showcasing the important ministry of Gulfside Assembly, the body participated in another test ballot—this one on favorite color. With a successful test complete, Swanson invited Bishop Ken Carder to lead prayer before the first ballot.

Carder did so, asking the Lord to grant all gathered “purity of motives, calmness of spirit, clarity of mind and unwavering commitment to God’s boundless love and relentless justice for all of creation.”

The first ballot, allowing people to vote for their choice of three episcopal nominees, was taken just before noon and closed at 12:07 p.m.

Shortly after the afternoon session began, results from the first ballot were announced. No candidate received the required 60% threshold to be elected bishop. More votes were scheduled for later.

Kentucky developments
During the worship service, Rev. Jim Savage of the Central Appalachian (formerly Red Bird) Conference carried in the bishop’s banner at the start of the service and read part of the Call to Worship , and Bishop Debra Wallace-Padgett, a Kentucky native, presided over Holy Communion. She is resident bishop of the North Alabama Conference and is serving as interim bishop for the Holston Conference.