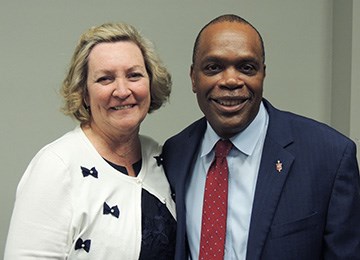 LAKE JUNALUSKA, N.C. – Bishop Leonard Fairley has been reassigned to the Kentucky Annual Conference, the Committee on Episcopacy announced Friday morning, Nov. 4, during the final day of the Southeastern Jurisdictional Conference.

One of the three newly elected bishops, Connie Shelton, will succeed Fairley in North Carolina, where he has been serving as interim bishop for the past year and a half.

“It’s good to be home and to be serving just two conferences,” Fairley said after the session, as he and his wife, Dawn Sparks Fairley, were talking with Kentucky delegates and other well-wishers outside Stuart Auditorium. Fairley said they didn’t find out until shortly after 8:30 Friday morning that they were being reassigned to Kentucky.

Kentucky delegates interviewed after the business session were uniformly pleased.

“We’re delighted that Bishop Fairley is returning, and we look forward to his leadership in the coming days, sharing his mission and vision as we all work together so the kingdom can come together on Earth as it is in heaven,” said Rev. Dr. Esther Jadhav, an alternate clergy delegate to Jurisdictional Conference.

“I think it’s good to have someone we know, someone who has led us well,” said Rev. Andrew Singh, a Jurisdictional clergy delegate. “We are grateful to have him and Dawn back with us. We pray God’s blessing on them.” 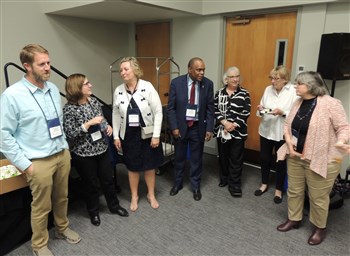 “It’s great to know that Bishop Fairley’s pastoral and caring heart will continue to impact the clergy and laity of the Kentucky Annual Conference,” said Rev. William Moore, a Jurisdictional clergy delegate.

Fairley has said that one of the more challenging things about serving simultaneously in Kentucky and North Carolina has been the long drives back and forth – a point Fairley again made as he and Dawn did a short video outside the auditorium.

“The car will be happy,” he said, smiling.

Other business
Troxler motion: The delegates finished a matter begun Thursday by overwhelmingly passing by voice vote a motion after the Committee on Finance and Administration said funds were available for it.

During Thursday’s session, a motion had been proposed by Rev. Jeremy Troxler, clergy delegate from the Western North Carolina Conference, that would establish a task force to study racial bias in the selection of episcopal nominees.

The language calls for the task force to be created “to study the impact of racial bias in the process of selection of Episcopal Committee potential reforms to the process that might reduce the harmful effects of racial bias in the nomination and selection process for episcopal candidate; furthermore, that such a task force be composed of greater than 50 percent representation from under-represented groups; and that the task force interview recent and past episcopal candidates to hear of their experiences and to solicit their input.”

Rev. Esther Rodriguez-Perez, clergy delegate for the Florida Conference, amended the motion, recommending that those on the task force be given an honorarium and reimbursed for travel expenses. The amendment was approved and sent to CFA, eventually leading to Friday’s approval by the delegates.