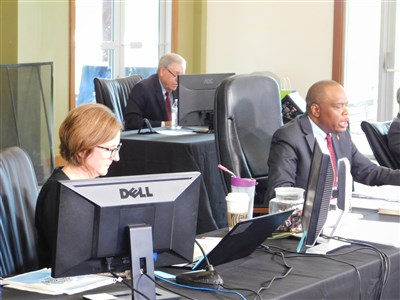 Clergy and  laity who serve in Kentucky Annual Conference leadership positions will be required to undergo anti-racism training at least once every four years, following action taken Tuesday, June 8, during the business meeting of the 2021 Annual Conference.

Members voted 436-87 to accept a motion presented by Rev. Shirley Burke, who chairs a newly formed anti-racism team, to begin the process of putting that training into place.

A related motion to hire a full-time director to focus on African-American ministries, presented by Rev. Dr. Kathy Goodwin, Chair of SBC21 (Strengthening the Black Church in the 21st Century), was referred to the Conference’s Council on Finance and Administration. No vote was taken; standing rules require any motions with budgetary implications be referred to CFA.

Plans to combat racism took up portions of both the morning and afternoon “worshipful work” sessions of the business meeting, which was again held online because of COVID-19 social-distancing protocols. 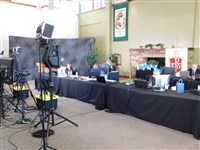 A temporary studio was set up and livestreamed for clergy and lay members from Holloway Hall, at the Conference Center in Crestwood. The proceedings also were livestreamed on the Conference’s Facebook Live page and website. People viewing on those platforms were attending as guests.

“We gathered with the theme of Knowing the Love of Christ and witnessing God’s love,” Bishop Leonard Fairley said after the meeting. “I am grateful and thankful that it lives through the clergy and the laity of the Kentucky Annual Conference.”

Anti-racism task force
An 11-member Anti-Racism Task Force formed under the auspices of the Board of Ordained Ministry and Connectional Ministries, recommended the quadrennial training. Rev. Kevin Burney, Assistant to the Bishop and Director of Ministerial Services, said the team was formed in response to a motion approved at the 2020 online Annual Conference in December.
Burke said these training steps will be taken: Burney praised the team, which had less than six months to complete its work rather than the normal 12 months between Annual Conferences. That work wrapped up June 1, he said. He also emphasized that all pastors wishing to be appointed to the Conference would need to agree to take part in the training.

Burney said people with questions can email antiracism@kyumc.org. Also, a dedicated web page will be set up on the Conference website, and a Facebook page also is planned. Two anti-racism webinars also are in the works for July and August, with more information to come shortly, he said.

Delegation to General Conference
In a video presentation, Coleman, one of the delegates to General Conference, said a special called one-day online session of Jurisdictional Conference will be held July 21 to vote on a merger of the Tennessee and Memphis Conferences and to address anti-racism efforts, responses to the pandemic, and to hear reports on leadership during this time of waiting.

Alan Beuscher, the head of the lay delegation, said the Protocols of Reconciliation and Grace Through Separation is expected to be considered when General Conference meets Aug. 29-Sept. 6, 2022. The proposal, which would lead to the split of the United Methodist Church, will provide a clear path forward for the denomination, he said.  He said that information is available at:  www.gracethroughseparation.com.

Jurisdictional Conference will meet in November 2022 to elect new bishops. Four in the Southeastern Jurisdiction are retiring this year, and some bishops, including Kentucky’s Fairley, have been asked to cover other annual conferences on an interim basis for 18 months.

(During the afternoon session, Fairley briefly addressed his upcoming role of covering the North Carolina Conference, in addition to continuing to lead the Kentucky and Red Bird Annual Conferences. He joked that his first assignment as a pastor was a three-point charge, but he never expected that would happen to him as a bishop.)

Kavanaugh update
Tom Coe, Chair of the Conference Board of Trustees, said plans are proceeding to sell the Kavanaugh Conference and Retreat Center, which is adjacent to the Conference Center in Crestwood.

Coe said a recent walk-thorough was held to determine the Conference property line. He anticipates having a surveying contract in place by July. Also, the trustees are consulting with a real estate advisory firm. The team also is working with Aldersgate and Loucon camps to repurpose supplies there.

CFA report and 2022 budget
After the report, presented by Rev. David Garvin, the Conference Treasurer, and Kim Keller, the first-year Chair of CFA, members voted to approve the report and the 2022 budget.

“I am pleased to report that the guiding principles of fiscal responsibility, faithful stewardship of resources, and local church engagement allowed us to emerge in a healthy financial position that we anticipate will support the Conference’s mission through our 2021 and 2022 budgets,” Keller said. Reserves and operating cash remain healthy, she said.

Garvin said CFA was able to meet all its financial commitments despite challenges presented by the pandemic.

They presented a budget proposal for 2022 of $6.4 million at an apportionment rate of 10%, down from 11%. Of the $6.4 million, $6.1 million would come from church apportionments, formally known as Our Mission Covenant.

Among other things, the budget includes 4% salary increases for Conference staff, who have received small or nonexistent raises for the past few years. The Conference also has saved considerable money through reduced staff over the past year, Garvin said.

Service of Lament and Remembrance
The video presentation acknowledged the current season of grief and lamenting on multiple fronts, including racial strife. After the video, 20 clergy and 13 clergy spouses who have died in the past year were honored by name: Retiree recognition
During the closing worship session, before current clergy appointments were read, 13 retiring clergy were recognized for their holy work through the years. Other action Upcoming Annual Conferences
Fairley and Coleman said Annual Conference is scheduled to be held in Owensboro for the next two years – and plans are to meet in person again.

The 2022 Annual Conference is scheduled to be held June 6-8. “Everyone put on your prayer clothes” and pray that we will be able to meet in person in 2022, Fairley said.

Looking ahead to 2024, the Conference has been invited to return to Northern Kentucky. Planners there understand the uncertainties since that will be after General Conference meets, Coleman said, but it is necessary to begin preliminary planning work. Members voted to begin the work to meet in Covington June 10-12, 2024.