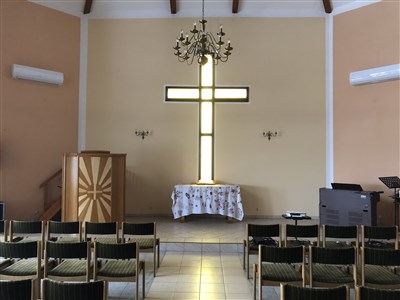 The close relationship between the Kentucky Annual Conference and the UMC’s smattering of churches in Serbia is warming the hearts – and everything else – of one small congregation in the Serbian city of Šid.

A $3,000 gift from the Conference’s Margaret Merrick Fund allowed the church to upgrade its heating system so congregants could meet for worship in relative safety despite the COVID-19 pandemic. Work was completed in early January, allowing members to worship together again for the first time in more than two months.

“They’re very grateful for our help,” said Rev. Dr. John Kalz, co-Pastor of Madisonville UMC. Kalz is one of the Conference’s leading ambassadors when it comes to the Kentucky-Serbia church missional relationship, which dates to 2008 and includes a trip that Bishop Leonard Fairley led in 2018.

In a Zoom interview, Kalz – who himself has been to Serbia four times with Conference mission teams – detailed the story behind the $3,000 gift. The church in Šid (pronounced SHEED) is a relatively new building with a large sanctuary, similar to most U.S. churches. But the heating system was inadequate for the region’s harsh winters, Kalz said, and Rev. Vladimir Poell Fazekaš and his congregants normally meet in a small room for worship during the winter because it’s much easier to heat.

That obviously wouldn’t allow for social distancing during the pandemic. But by upgrading the HVAC system so the sanctuary can be heated, congregants are able to worship again, and that room will be available for use year-round.

“It’s a particularly good missional investment, in my estimation, because it would cost a whole lot more money here than it does there,” Kalz said. “Not only for the worship that will take place in the church community, but also it’s where our teams go and stay on mission trips, and it’s where they hold districtwide events.” 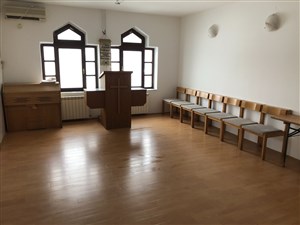 Kalz said he had learned of the church’s need for an upgraded heating and air conditioning system. After discussing it with fellow Pastors Tami Coleman of Hanson UMC and Matt Seel of Petrie Memorial UMC, Kalz approached William Moore, the Conference’s Director of Connectional Ministries, about lending assistance.

The UMC’s presence in Serbia is small, Kalz said, with about 15 churches in the northern part of the country, close to the border with Bosnia-Herzegovina and Croatia. Serbia came under control of the Austro-Hungarian Empire during World War I, then became part of the newly formed country of Yugoslavia, which ultimately disintegrated in the early 1990s.

The region is ethnically diverse with a number of languages spoken, Kalz said. The primary religion is Eastern Orthodox. Protestant churches are relatively rare, but diversity is a highlight in the region, he said.

Kalz said it is ironic that the church is getting an upgrade from a U.S.-affiliated church after the original structure was heavily damaged by NATO bombing in the 1990s during the region’s civil war.

The Šid congregation is small but has grown since COVID-19 as more people seek spiritual connection and comfort, Kalz said. That contributed to the challenge of worshiping safely and legally, since Serbia’s social distancing protocols are more stringent than they are in most U.S. areas. Kalz said that for a time, only eight people could be in a room.

The United Methodist churches there have been doing some social outreach during COVID-19 and have been more open to conducting one-on-one meetings, Kalz said.

“They have grown since COVID started, and that’s been a glory sighting because it’s particularly difficult to grow a Protestant church there because of the cultural baggage that goes with being Protestant,” he said.

Fazekas, the Šid pastor, reiterated that in an email. “Until last year we were about 25 people in church,” he wrote, “and 90% of those were 60 or older. … Last year we had growth from 25 to 40 people plus children. We got some new younger families during (the) pandemic.” The church growth during such difficult times presented “a happy problem,” Fazekaš said.

Kalz said the church has also reached out to three refugee camps in the area. Nearby Croatia is a member of the European Union, but the refugees, including people fleeing dangerous conditions in Iran and Afghanistan, are caught in limbo. Also, a woman who lives in Bosnia has started attending because it’s the closest Protestant church to her, he said.

“The church building there is more than just a worship center, it’s also a missional outreach center for children and the refugee community and the community at large,” Kalz said. Fazekaš agreed that it will be a blessing to be able to meet in the sanctuary year-round, for not only worship services but concerts and free English classes.

The region is stable and peaceful now, unlike 20 years ago when the Serbs, Bosnians and Croats were fighting with one another. Kalz said that in northern Serbia, where there’s historically a lot of diversity and peaceful coexistence, “it’s kind of a nonissue today.”

The Merrick Fund was established in 1982 and has allowed the Conference to carry out missional work and ministry beyond budgeted funds, said Rev. David Garvin, the Conference Treasurer. The $3,000 gift is separate from money collected as part of the Bishop’s Missional Offering at Annual Conference in December that will be used for future Serbia missional work.

Kalz, for one, is thankful for the close ties between the Kentucky and Serbian church communities even though they are separated by 5,000 miles and seven time zones.

“I am one of these people who are always very glad for our United Methodist connection and think it’s a wonderful thing. … One of the blessings is that we can have these relationships with each other and have these partnerships that we wouldn’t have otherwise.”

View a video from our ministry partners from the Serbian UMC