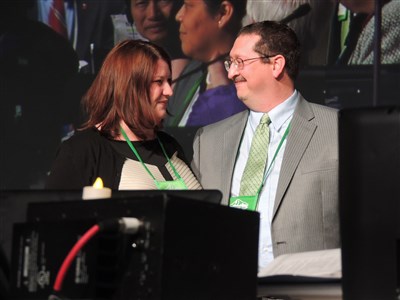 The Rev. Gary Graves, pastor of Paris First in the Lexington District of the Kentucky Conference, has been elected secretary-designate of the General Conference. He will take over for the Rev. L. Fitzgerald (Gere) Reist, who is stepping down this year.

Reist could have stood for election one more time, but he said he feels strongly that with General Conference going to Manila in 2024 the new secretary should gain experience at the 2020 gathering in Minnesota. Manila will be the first central conference site for the assembly.

Reist said he wholeheartedly supports Graves’ election. “Gary is more than qualified to be General Conference secretary,” he said.

He has seen a lot of change through the years, such as the General Conference’s shift in 1992 from interns using typewriters in a typing pool to recorders using computers for the first time.

She has been by his side as the work went from stacks of paper petitions to predominantly electronic submissions.

Lew Nichols, Kentucky Conference lay leader and member of the General Conference delegation, served with Graves on the Committee on Reference. “I was amazed at his organizational skills and his depth of knowledge,” Nichols said. He went on to share that the entire delegation was proud to stand up and applaud when Graves was elected, and he said he doesn’t think anyone else is as well trained to step into the position of General Conference secretary.

Graves has enjoyed his years as petitions secretary and said he is most looking forward to continuing the relationships that he has built while serving with the General Conference. “I enjoy working with all the people across the church and the experiences that I’ve had here as petitions secretary.”