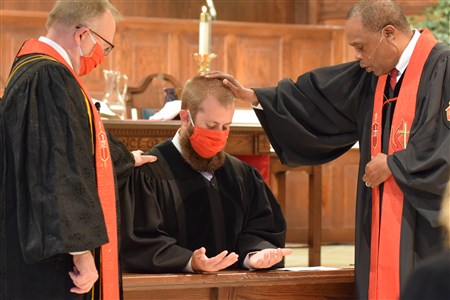 Seven Kentucky Conference clergy were ordained as elders and one was ordained as deacon Saturday, April 17, during a Service of Commissioning and Ordination at Christ Church United Methodist in Louisville.

In addition, two people were commissioned on the elder track and one on the deacon track, becoming provisional elders and deacon.

The service had been scheduled to take place during the 2020 Annual Conference but was delayed because of COVID-19 social-distancing protocols. All of those recognized Saturday were formally installed in their new positions, retroactive to July 2020, during December’s Annual Conference session, which was held online.

The Commissioning and Ordination Service for this coming year’s ordinands and conferees will take place Monday, June 7, during the 2021 Annual Conference, which will again be conducted online.

A limited number of family and friends were allowed for each person recognized Saturday, with the service also streamed live on the Conference’s website and Facebook Live page. Between 125 and 150 tuned in on Facebook Live, and about another 50 watched on the website.

Bishop Leonard Fairley presided during the service, along with Rev. Kevin Burney, Director of Ministerial Service and Assistant to the Bishop. Bishop Gary Mueller of the Arkansas Annual Conference presented the sermon, “You Feed Them.” The ecumenical greeting was presented by Rev. Molly Shoulta Tucker, Pastor of Ridgewood Baptist Church in Louisville, who is married to ordinand Rob Tucker.

Mueller’s sermon was based on the passage from Luke 9:10-17, the story of the five loaves and two fishes. Alternating between jokes about college basketball rivalries and deadly earnestness at the current state of the United Methodist Church, Mueller said the ordinands and conferees had heeded God’s call to ministry at a crucial time in the church.

“The reason why you’re doing this is God has called you into the feeding business,” Mueller said, noting that the church has allowed itself to land squarely in the middle of today’s culture wars.

“Let me put it as clearly as I can. People need a savior. I know I do,” Mueller said. The Bishop called it “embarrassing” and “sinful” the way the people of the UMC are treating each other during the current unrest. Nonetheless, he ended on an optimistic note of love and evangelism directed at the ordinands and conferees – as well as the UMC as a whole.