Delegates and visitors gathering in the plenary hall Thursday morning were ushered in by the singing of the Cardinal Singers from the Red Bird Missionary Conference. Choir members, decked out in bright red robes, energetically sang for Christ.

The business portion of Thursday, May 3, began with presiding officer Bishop Thomas J. Bickerton from the Pittsburgh Episcopal Area reminding us of the importance of holy conferencing, stating that in our discussion of issues that were to come before the body we must "maintain unity of the spirit and a bond of peace."

Several items of business were enacted during the morning session, including
• supporting a measure to direct United Methodist boards and agencies, annual conferences, and local church groups to consider the school schedules of young people when planning meetings and events;
• rejecting  a motion to set a time for discussion of a petition directing the General Board of Church and Society and the General Board of Global Ministries/Women’s Division to withdraw membership in the Religious Coalition for Reproductive Choice;
• voting to change the name of Lay Speaking Ministries to Lay Servant Ministries; and
• recognizing two General Conference delegates who were hospitalized May 2. Jessica Ireland, Iowa Conference, was struck by a car—driven by another General Conference delegate—while walking back from dinner.

Aside from acting on many items, the body also became entangled in trying to work through language around the issue of human sexuality.

After more than an hour of passionate debate and clear disagreement, two items stating Christians have different opinions about homosexuality were not approved by the 2012 General Conference, leaving the current language in The Book of Discipline intact.

Paragraph 161.F of the Discipline states: “The United Methodist Church does not condone the practice of homosexuality and considers this practice incompatible with Christian teaching.”

The Rev. Adam Hamilton of the United Methodist Church of the Resurrection in Leawood, Kan., and the Rev. Mike Slaughter of Ginghamsburg Church, Tipp City, Ohio, proposed a substitution for part of the paragraph that sought to clarify that United Methodists disagree on whether homosexual practice is contrary to God’s will and urged unity over division and respect for coexistence. Their substitution would have replaced the last paragraph of a petition submitted by the Global Convocation of Young People after its 2010 conference.

Jen Ihlo, a Baltimore-Washington Annual Conference delegate, worked on the Church and Society Legislative Committee’s subcommittee on human sexuality. She said there was lengthy debate about where the church is on homosexuality.

“This petition represents that compromise; it states our positions are vastly different,” Ihlo said. “I am a lesbian and a child of God. I strongly urge the body to adopt this compromise so gay youth will recognize the church loves them and the pain will stop.”

The Rev. Maxie Dunnam of the Kentucky Annual Conference spoke against the substitution saying, “I see no reason to state that we disagree. If we’re going to state what we disagree about, we might as well put that as a headline on our Book of Discipline.”

The vote on the Hamilton-Slaughter substitution defeated it 441-507, and the main motion failed 368-572.

As time for the mid-morning break came, members of Reconciling Ministries, the Methodist Federation for Social Action and others led by Common Witness Coalition, a gay-rights group, gathered within the bar of conference.

Upon reconvening, presiding bishop Mike Coyner from the Indiana Annual Conference asked the protesters to clear the bar. When they did not, he cancelled the rest of the morning session. Protesters stayed within the bar of conference to sing and serve communion throughout the break.

After that, the business of General Conference got back on track.

During the lunch break, the Cardinal Singers sang again, this time in the lobby of the convention center.  Corbin District Superintendent and his wife, Terrie, were among those enjoying the singers.  As the Cardinal Singers were finishing their selections, the Lake Junaluska Singers asked to join them onstage, and the two groups performed a gospel song together.

Business in the afternoon plenary sessions included approval of the restated Clergy Retirement Security Program, which combines a defined benefit component with a defined contribution component. Delegates did not approve a proposed constitutional amendment that would have allowed General Conference to designate a committee to reallocate funds between sessions of the quadrennial gathering.

The day ended with worship service. The theme of the night was "Feed." 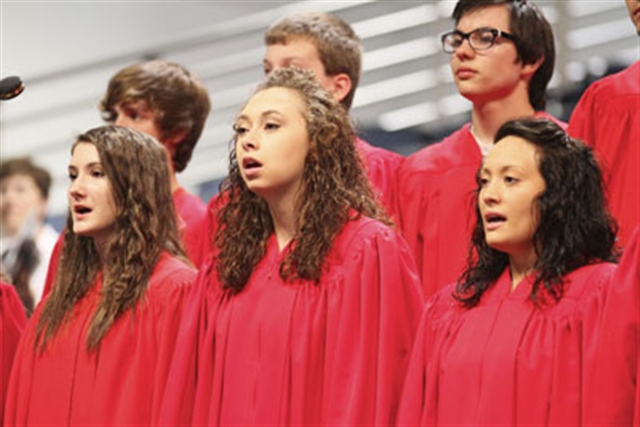