Louise Baird Short rode a camel in the ancient city of Petra at age 90.

She visited the Great Wall of China at 95.
When she turned 100, she made her last trip abroad to visit Angkor Wat in Cambodia, the largest religious monument in the world.
So no one will fault her if she takes it a bit easy for her 109th.
"We're waiting for the big celebration at 110," Short's caregiver, Fran Fornof, says with a smile.
On Saturday, Short will hit a milestone nearing Guinness World Record proportions when she turns 109 years old. Though it is a challenge to find an official office that can document exactly where Short falls among Tennessee's oldest residents, she is assuredly one of the oldest Nashvillians.
And, oh, what a life she has lived.
From a young girl raised on an Indiana dairy farm working the family ice cream business to a woman of prestige married to Roy H. Short, an esteemed Methodist bishop who for years served the Florida and Cuba region.
It's hard to minimize the magnitude of living more than a century.
"I've got so much to remember," she says.
Mementos of life
In 1906, the year Short was born, there were only 45 states. A stamp cost 2 cents, and one of the very first radio programs was broadcast to ships at sea.
Back then, "we had horses, we didn't have cars," Short notes from her spot in the plush gray recliner in her McKendree Village home. Today, she is dressed for company in a black suit jacket over a white lacy shirt, her short strawberry blond hair in curls, and pearl earrings and a bright red pin completing the outfit.
She has lived here, in this Hermitage apartment, for 29 years. Decades ago, her husband helped find the land for construction of the 17-story retirement community, and the space they once shared is now filled with mementos of her life and their 68 years of marriage.
Above the entryway are brass bridle ornaments — medallions collected from pony harnesses used in her youth. Dangling on the walls are displays of silver spoons and forks collected from dinners with her husband and dignitaries around the world. 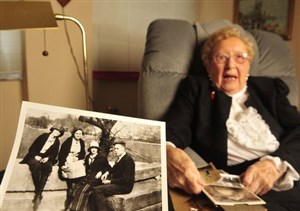 In Short's hand is a photo, three college girls sitting underneath a leafless tree on the University of Louisville campus. Decked out in a striped skirt and derby hat, Short rests her arm against that of the man next to her.
"The day I met my husband," Short says.
A valedictorian of her high school, Short traveled the seven or so miles from her family's dairy farm to study in Kentucky. One day on campus Roy Hunter Short, a young man from a nearby seminary school, came to talk to her poetry club.
When she got on the street car to go home he sat next to her.
Though she was lucky enough to secure a teaching job, unmarried female teachers were preferred, she said. So she left her position, and in 1926 married the Methodist minister with whom she'd fallen in love.
The couple had three children — all boys — and Roy Short's ministry led the family's path. He became the district superintendent for the denomination and edited "The Upper Room," a nationally distributed Methodist devotional guide, before being elected bishop for the Florida and Cuba region in 1948. Then a man of prominence, he served more than a decade as secretary for the council of bishops of the Methodist Church until 1968.
Around them, America changed. Presidencies. World wars. Cars, telephones, televisions.
Roy Short traveled extensively, trips to Latin America, Africa, Fiji, Australia, Korea, Hong Kong and Europe. And, Louise Short says, "I traveled almost constantly with him."
The Shorts lived in Nashville twice while Roy Short worked in the church. And, upon his retirement in 1972, the family came back.
When he died a little more than two decades later at age 92, Louise remained settled in Nashville, but she didn't settle down.
She continued to drive until she was 100, surrendering the keys because she was ready and not because she was told to. At 101, a camera captured her standing on a surfboard at a beach in Costa Rica for a family wedding. And when she was 106, she earned a standing ovation at the United Methodist General Conference in Tampa, Fla., maintaining the perfect attendance record she started in 1939.
"I've been very busy with other interests," she says. "I've had a wonderful life. And it's been so full ...."
Both parents were centenarians
There aren't many tricks to her long life, she says. Her parents were opposed to alcohol, so there was never any in her home.
But more to it, longevity is in her blood. Short's mother lived to be 105, and her father was 103.
So, she says, "we never thought about death."
In fact, she adds, "It's only now, in these last months ... that I have been conscious of age."
Admittedly, she is slower now than she once was. She is still mobile, able to move around with a walker at times, but she doesn't go out much, except down to the salon in her building to get her hair done. She had a stroke not long ago, and though she is still sharp-minded and conversational, it did seize some of her memories.
But she has generations of descendants — seven grandchildren, 20 great-grandchildren — to help her recall and continue to form memories.
"What keeps me happy," she says, "is living life over again with all of them."
It has been a life of remarkable experiences, and now she is on the cusp of another accomplishment. It's something she can accomplish without traveling to a far-flung locale. This time, she can mark a milestone in an exclusive club — becoming a supercentenarian — just by turning 110.
Happy Birthday, Mrs. Short. 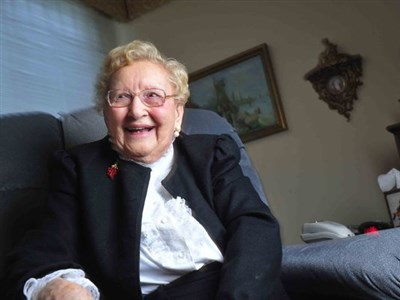