From the time that the doors of Broadbent Arena opened on Friday night, there was an electricity of anticipation in the air. Immediately, young people were drawn to the corn hole games, the video games, and the artists’ booths; but mostly they were drawn to each other. Winter Blitz is an awesome youth rally in and of itself, but just as importantly, Winter Blitz is a time of youth and young adults meeting, greeting and fellowshipping together, a time when bonds that will hopefully last a lifetime are formed.
It is said that a family that prays together, stays together. Isn’t that what we hope for our young people in the denomination: that they can connect with other young people who will become their spiritual family? By bringing our young people together annually to listen to music, speakers and a worship experience that speaks to them, we are providing an avenue for this connection and for the future of our denomination.
Singers Lindsay McCaul and Jonny Diaz and their band were well received and played a variety of worship music that had participants alternating between bouncing on their feet and passionately waving their hands in the air as they worshipped Christ.  Bean and Bailey brought laughter to all the sessions with their unique brand of humor. According to Bean and Bailey, “they believe humor is a gift from God; a gift they use to build bonds and break down barriers.” The keynote speaker for the weekend was Pastor Fred Lynch. Fred brought the gospel alive using a unique blend of traditional preaching style and rap. Fred rapped chapter and verse from both the book of John and Ecclesiastes and had the audience completely engaged and in awe. The late night concert on Saturday featured Group 1 Crew. The band was high energy and brought the evening to a rousing end.
Throughout the weekend, not only did young people have fun enjoying the worship experience, many were also able to give back to the surrounding community by engaging in mission work. On Saturday afternoon over 350 youth and volunteers served the Louisville area in various capacities. In addition to those that were fortunate enough to be able to physically serve; all had the opportunity to give monetarily through the mission offering. On Saturday night, $2,567.46 was collected and will be split between our Kentucky Conference camps; our conference youth mission trip to Honduras and the United Methodist initiative with Imagine No Malaria.
Saturday night, an altar call was given and many responded, saying that they were ready to let Christ into their hearts and their lives. On Sunday Bishop Lindsey Davis and Rev. Shea James led the assembly in Holy Communion, opening the table to all who were present. An army of volunteers helped with passing out the elements throughout the arena. After communion, Bishop Davis issued a call for any that felt that they were being called into the ministry to come forward and explore their calling. Twenty-eight responded by coming down the aisle and will now work with the Department of Ministerial Services in discerning how that call will be fulfilled in their lives. 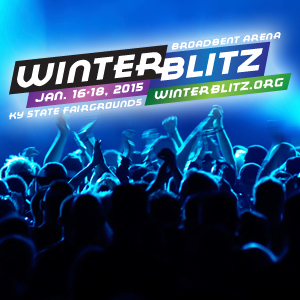