A call to revise our social principles 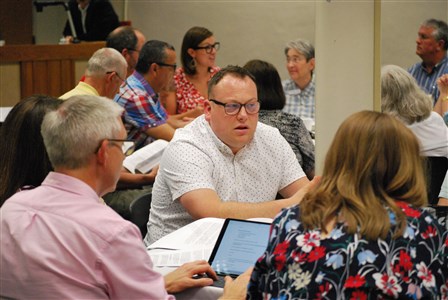 WILMORE, KENTUCKY – Lay and clergy members of the Kentucky Annual Conference participated in the “Public Conversation on the Draft of the Revised United Methodist Social Principles” on Tuesday, June 26. The KAC’s Lexington District hosted the event at Asbury Theological Seminary in Wilmore.

It was my honor to lead and facilitate the conversation as a board member of the General Board of Church and Society. Dr. Jessie M. Smith, senior executive director for Research, Planning and Spiritual Formation of the GBCS, joined the conversation via Zoom teleconference.

The General Conference initiated a process in 2012 to revise the church’s Social Principles. A full review has not occurred since the 1968-1972 quadrennium, when the first such document was proposed.

“The Social Principles, while not to be considered church law, are a prayerful and thoughtful effort on the part of the General Conference to speak to human issues in the contemporary world from a sound biblical and theological foundation as historically demonstrated in the United Methodist traditions,” according to the Social Principles preface in the 2016 Book of Discipline. “They are a call to faithfulness and are intended to be instructive and persuasive in the best of the prophetic spirit. The Social Principles are a call to all the members of The United Methodist Church to a prayerful, studied dialogue of faith and practice”.

In 2016, the UMC’s General Conference asked the GBCS to begin a revision process. The board suggested that a new document address three goals: be more succinct, theologically grounded, and globally relevant.

About 65 people participated in the public conversation at Asbury. Six discussion groups looked at one of the sections of the revised Social Principles draft. The six sections are: 1) The Community of All Creation, 2) The Nurturing Community, 3) The Social Community, 4) The Political Community, 5) The Economic Community, and 6) The World Community.

The groups considered the following questions in their conversations:

1) Do you see language that represents our goals to create a document that is more succinct, theologically grounded, and globally relevant?

2) Does the draft reflect our distinct theology and heritage as United Methodists?

3) What in the section is particularly inspiring?

4) What in the section needs to be strengthened or clarified?

The discussion groups were facilitated by the following members of the Kentucky Annual Conference: Rev. Dan Baer, Rev. Chrysanthia Carr-Searls, Rev. John Choi, Rev. Kaury Edwards, Rev. Dr.  Eliseo A. Mejia-Leiva , and Mr. Dustin Puegel. Each group shared a brief report of the recommendations discussed at their tables. These recommendations have been sent on to the GBCS as it  continues its  work on the revisions.

All United Methodists are invited to offer their thoughts on the draft document. You can do so by commenting at www.umcjustice.org/sp2020. A copy of the document can be found at that web link.