A church for children 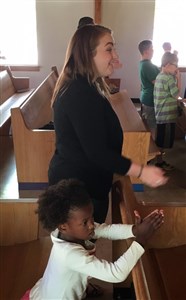 Rev. Corey Nelson and his small team have seen so many children come through Grace United Methodist Church since they started ministering to their troubled southern Louisville neighborhood in 2013 that they finally took what they see as the next logical step:

They turned Grace over to the kids.

The result, which launched in early September, is Grace Kids: A Church for Children. Pastor Corey is the lead pastor; his part-time assistant pastor is Jocelyn Church.

The idea of a church ministry focused almost exclusively on ages 3-18 is unusual, to put it mildly. But it seemed natural when Corey, Jocelyn and Corey’s wife, Rickelle, looked at who was always around the church, which is located at 900 Denmark Ave. in the Wyandotte neighborhood, just two blocks from the legendary Churchill Downs.

“It made too much sense, and we went to the Conference and told them that,” Pastor Corey said. He said both Gary Gibson, superintendent of the Kentucky Conference’s Heartland District, and Eric Bryant, director of New Church Development, were extremely supportive of the endeavor.

“I think it’s a huge risk financially, because obviously the children can’t support it, and the money will have to come from other places,” Pastor Gibson said in an interview.

The first couple of Sunday afternoon services, around 30 kids showed up, Pastor Corey said. He said it wouldn’t surprise him if there were 60-80 by Christmas. “That’s just how things track around here.”

Church is informal and clearly geared toward a young audience with limited attention spans. There’s contemporary music and lessons in UMC rituals such as the Apostles’ Creed, then after a short sermon, the kids break into small groups and the pastors go over the main points of the message. After the service, it’s play time – and things can get a little rowdy.

But Sunday services are just the start at Grace Kids. On Wednesday evenings they conduct small, age-specific groups with a focus on discipleship and leadership.

The evening starts with a family-style meal where everyone sits around the table and they talk about whatever is going on in the kids’ lives. From there, they transition into small discussion groups that stress high accountability. After that, they get play time.

“It’s not enough for us that they know Bible passages; we want them to know how to live it,” Pastor Corey said. “Beyond that, we also want to give them space to be children and to be kids, which is something they don’t always get.”

Friday, Family Fun Night, has no agenda other than providing a safe space, meal, fun and fellowship. They serve not only children but also their typical clientele of neighborhood addicts, alcoholics, prostitutes and homeless.

“Friday nights remind me of those nature documentaries, where as the dry season takes hold and the water dries up, you see everyone around the watering hole peacefully co-existing,” Pastor Corey said, adding that they take great care to maintain a safe environment for the children.

Friday serves as a feeder night for Wednesdays and Sundays. “We get the kids and the community members who would not otherwise ever step foot in the church,” Pastor Corey said. “It helps us to build trust with them and also to demystify their preconceptions about it.”

The small church, which still has a Sunday morning “legacy service” attended by about 20 longtime members, also formerly hosted Heathen Church, a Sunday afternoon service that ministered to addicts and other adults in crisis.

When Grace Kids became a reality, Pastor Corey and his team did some renovating to make the building more appealing to children. The church is brightly painted and cheerful, and Rickelle Nelson is painting an upstairs room to look like a night sky. The room will be used as a prayer chapel.

The team was very specific about the colors they used to decorate the church: green for God the creator, yellow for the light of Christ, blue for baptism, purple for the royalty of Christ the king, and red for the Holy Spirit. His office also is chock-full of candy that the kids are occasionally allowed to help themselves to, provided they are behaving well.

On a recent Sunday, more than two dozen children of various ages and races gathered at church and started their day playing in the lower level. Many of them congregated in a large multipurpose room and took part in a raucous game of dodgeball.

Around 3:30, the kids were called to go to the sanctuary for church. Pastor Jocelyn presented the sermon this day, talking about baptism. She and Pastor Corey plan to baptize any children who desire it and who haven’t been baptized previously.

In their small groups after the sermon, they discussed the significance of baptism and also explained that their parents or guardians will have to sign a permission slip before they can actually be baptized, whether by sprinkling or immersion.

After church, it was time to let the kids be kids and play some more. Some resumed their dodgeball game. Others found blocks, crafts or other quieter activities. The adults got and gave many hugs and high-fives.

Everyone seemed to be having a wonderful time.

He said that churches spend a lot of time and effort trying to attract millennials – but the children are here now. “Why not begin shaping the church of tomorrow through these kids?” he said. “And they want to be here.”

Most of the kids either walk or ride bikes to church. He and his team pick up a few who live farther away. A few kids are dropped off by their parents or other relatives. A lot of them have behavioral issues; the adults firmly but lovingly work with them to keep them under control and on task.

Having enough money is a constant challenge. The Conference provides about half the funding, including pastoral salaries. Fundraisers cover some needs, as well. Grace’s legacy members, though small in number, are generous and supportive, Pastor Corey said. And the kids themselves sometimes place a little money in the offering plate.

A board of directors oversees administrative matters and also provides logistical and professional support. There are teachers, nurses and other professionals who guide and assist the team. Many of them also are actively involved in helping, Pastor Corey said.

Even the most hardened children who come through the doors of Grace Kids have the capacity to be very sweet and caring, he said. They’ve had some success in relationship-building. The neighborhood is about 60 percent white and 40 percent black, and race relations can be tense at times. But inside the church, no one seems to notice or care about color.

Pastor Jocelyn, 23, has been part of the Grace team for three years. She said she has learned more from the kids than they could possibly have learned from her.

“I think it’s awesome. They help people a lot,” Mayra, 14, said of Pastor Corey and his team, adding, “This is the best church I’ve ever been to.”

Destanie, 12, said she likes that “any kid can come and they’re not judged about who you are.”

Acacia, 8, said her favorite part of Grace Kids is the crafts. But she’s also quick to mention Corey, Jocelyn and Rickelle.

WANT TO HELP?
Grace Kids: A Church for Children can always use more volunteers. Send an email to: pastorcorey@heathenchurch.com if you’re interested in helping and, as he puts it, “having your heart stolen. “