A day of service and praise at Annual Conference 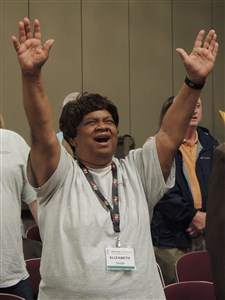 COVINGTON, Kentucky – Praise and service were on display in a big way Tuesday during the second day of Annual Conference at the Northern Kentucky Convention Center.

It started early, with Bible Study by Lisa Yebuah, and didn’t end until nearly 9 p.m. EDT, with a largely unscripted but moving Service of Worship and Prayer. In between was recognition of retiring clergy and Church Beyond: An Afternoon of Service.

During the retirement ceremony held in the morning, 19 clergy members were honored for their years of service in ordained ministry – a total of 588 years, Bishop Leonard Fairley said.

“They have served well, and now we celebrate that ministry in a way that reminds of the ministry being passed from two of the great leaders in Israel’s history,” the bishop said. That was when Elijah passed the leadership mantle to the younger prophet Elisha.

More than 700 people took part in about a dozen projects and three workshops during Church Beyond: An Afternoon of Service. Participants could take part in various projects, among them adult coloring to send to service people, assembling health kits, and various small assembly projects.

At Rise Against Hunger, volunteers assembled 15,120 meals to serve to the hungry. At one offsite project at the Children’s Home of Northern Kentucky, the team used chain saws to do some serious clearing and landscaping, saving the agency $8,000, Mrs. Holland said.

Of the roughly 730 people who took part in Church Beyond, about 225 of those attended one of three workshops on worship, United Methodist Communications, and New Church Development, she said.

Mrs. Holland said she spent “many, many, many hours” receiving and responding to emails, making phone calls, and using spreadsheets to track registration. But all the hard work was worth it.

“It went exceptionally well. It really helped to have some good leaders for the projects,” she said.

Her favorite glory sighting: Two couples went to Hosea House for a project that had fallen through. But somehow they didn’t get the word, so they ended up not just serving meals to the homeless, they blessed a group of high school basketball players who already were scheduled to help at Hosea House.

“They were actually ministering not just to the people receiving meals, but also this group of young men,” Mrs. Holland said.

“God was not going to let that project fall through, bottom line. … God had a better plan for that project than I could ever have come up with.”

Mrs. Holland also said that over the past nine years, the KAC has shipped 17,742 health kits assembled at Annual Conference to the United Methodist Committee on Relief, or UMCOR. Each kit – now known as hygiene kits – is valued at $12, meaning that since 2010, the KAC has shipped nearly $213,000 worth of kits to UMCOR. Plenary session

During the morning plenary session, Bishop Fairley reported that the offering taken up Monday evening for the Isaiah Project totaled $3,490.

The bishop also reported that the Extended Cabinet donated $20,000 to fund Campus Ministries. Of that, 45 percent will go to each of the 10 campus ministries across the KAC, 45 percent for development opportunities for campus ministers and students, and 10 percent to Africa University.

The offering collected at Tuesday night’s worship service will be added to the Cabinet’s donation. That total will be announced Wednesday.

The New Church Development team, led by Director Eric Bryant, gave a detailed report, focusing on the fact that every church was planted at some point. Rev. Bryant, himself a former church planter, is in his first year as NCD director.

NCD also is focusing on three key goals: strategic planning in each district, a coaching community for current planters, and an upcoming academy for prospective planters, Rev. Sparks said.

Annual Conference will wrap up Wednesday with the memorial service for deceased clergy and spouses, more plenary sessions, and the Service of Sending Forth.