Do You See What I See: A dialogue on church and race 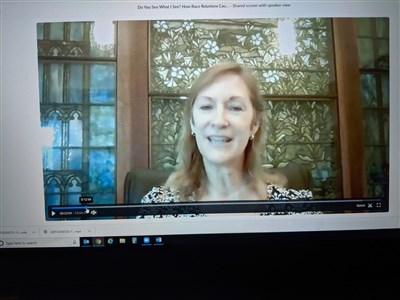 Webinar panel agrees: Still lots to be done in Kentucky

The Kentucky Annual Conference has begun having a long-overdue dialogue on race relations, but it will be a long-term process to see any lasting improvements.

That was the general message of panelists who took part in a webinar Saturday, July 25, as part of the race-relations series “Do You See What I See: How Race Relations Cause Us to See Things Differently.” Rev. Jean Hawxhurst moderated the panel, which was made up of clergy and laity from across the Conference. Several dozen people registered for and attended the webinar from the safety of their homes during the COVID-19 quarantine.

“We as a body of Christ must continue efforts to close those divides,” said Rev. Alvin Goodwin, a retired Kentucky elder who now serves as a chaplain for St. Thomas Hospitals in Nashville, Tennessee.

Rev. Jack Steiner, who is involved in urban ministries in Louisville and is a former police officer, said we must rely on the Holy Spirit and also recalled that Jesus very deliberately cleansed the temple. “The Jesus that I resonate with is radical, is a disruptor,” Steiner said.

Steiner recalled the late U.S. Rep. John Lewis, an icon of the 1960s civil rights marches, who used to channel “good trouble” – including peaceful, nonviolent protest. Steiner said “good trouble” might at times conflict with the wishes of law enforcement and government authorities, but such conflict, practiced appropriately, might be necessary to repair our broken system.

Lynn Windley, a lay person and corporate executive, was asked about the difference between the culture of the church and the corporate world. Windley said there really was no difference, that a glass ceiling exists in both domains. For instance, she said that across Kentucky and three other United Methodist conferences where she has lived, she has yet to be at a church overseen by a black district superintendent.

But a bit later, Windley also shared a positive story about a charge her pastor-husband, Mark, served in Indiana. The two small, all-white rural churches were initially apprehensive to have an African American pastor, but with time they were able to establish relationships and change hearts for the better.

Rev. Esther Jadhav, Associate Dean of Intercultural Affairs at Asbury University, stressed that listening to each other is the key to positive change. “It is time for us to really ask these questions in a genuine manner that we really move the needle on the issue of race relations.”

Rev. Craig Tuck, who served for years in Louisville urban settings before recently moving to a church in Bowling Green, said that “restorative justice” – something he was involved with in Louisville – is a tool that could help the Conference. (Restorative justice is an approach to criminal justice in which victims and perpetrators of a crime are brought together in a meeting in an effort to help repair the harm.)

Rev. James Williams, a Lexington pastor and former district superintendent, acknowledged that “we have a long way to go in the Kentucky Conference in race relations and also in theology, just as in how we see each other.”

He drew on his experience as a DS recounting conversations with congregations that requested they not be appointed pastors of color or females. The casualties of such attitudes often are black clergy who leave for other conferences where they have more opportunities with better pay, he said.

Following up later, William added that we are working in a “broken system” in the UMC. The Appointive Cabinet, which determines pastoral assignments, has not invited churches to lament and struggle along with the Cabinet, he said. The only way to improve is for churches to enter into that “sweat and prayerful process … not letting them off the hook, so to speak,” and he said it’s time for the Cabinet to urge churches to confront those issues.

The bottom line, Williams said, is that we need to be prepared to have “difficult and awkward conversations” about race relations if things are to improve across the Conference.

Panelist Josiah Brock, a member of Crescent Hill UMC, said he has attended some of the recent protests in Louisville following the police-related deaths of George Floyd in Minneapolis and a local woman, Breonna Taylor. Brock said he was “appalled” at the lack of religiosity at the protests. After one, he knelt in prayer at Jefferson Square in downtown Louisville and was encouraged that some people – not necessarily people of faith, even – responded positively and recognized the importance of visibly invoking God’s help.

Rev. Dr. Kathy Ogletree Goodwin, chair of SBC 21 and one of the organizers of the “Do You See What I See” initiative, praised Bishop Leonard Fairley’s leadership and insight on race relations and said he has a plan to increase racial and ethnic diversity across the Conference.

Cathy Bruce, the Conference’s Associate Director of Connectional Ministries for Communication, said in an email that at one point, 82 people joined the webinar. She said she had been hoping for 100 but was still very pleased with the turnout, particularly given that this is only the second webinar Conference Communications has sponsored.

Hawxhurst said at the beginning of the webinar that the information gathered will be delivered to the Conference in an effort to address the challenges in improving race relations.
The next phase of the initiative will be a Bible study during Sundays in August. Then in September, churches will be invited to take one Sunday and do clergy exchanges between white and black churches.