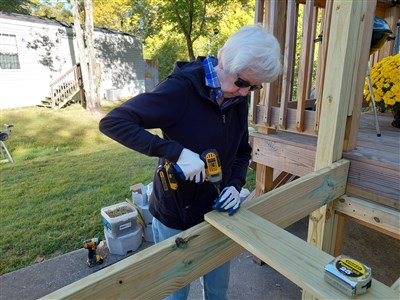 HOPKINS COUNTY, Ky. – Andrew Pence could have spent his fall break from Lincoln County High School relaxing in between cross-country practice sessions. But he had something more ambitious in mind.

The 16-year-old sophomore was part of a work crew preparing one day last week to lay laminate flooring at a house in Dawson Springs, Kentucky. He was part of the five-day Conference Mission Trip to help with tornado-recovery work. He also happened to be the youngest person among the nearly three dozen people on the work team.

“It’s all right,” Andrew said of being the lone teen on the group, largely made up of retirees who readily embraced the young member of New Beginnings UMC in Stanford, Kentucky.

“I decided to come down here instead of sitting around the house doing nothing,” he said.

Andrew and about two dozen other people joined Bishop Leonard Fairley and his Appointive Cabinet on the mission trip to Hopkins County. They stayed at Madisonville First UMC, which has been a leader in hosting and coordinating mission work during the cleanup and emerging recovery process in Dawson Springs, about 20 miles southwest of Madisonville.

An EF4 tornado the night of Dec. 10, 2021, leveled much of the town of about 2,500. Seventeen people died in Dawson Springs – among nearly 100 across southwestern Kentucky who were killed in the severe weather outbreak. 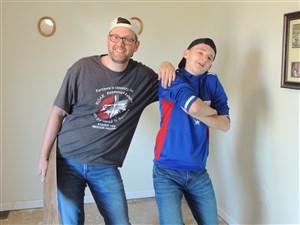 Rev. Dr. John Hatton, an Appointive Cabinet member who serves as superintendent of the Heartland District, was part of the team with Andrew. They were preparing to visit the hardware store to buy a saw they needed for the work.

“It’s just a joy to serve, to be the hands and feet of Jesus, to listen to their story, and to help redeem a very difficult time of life,” Hatton said. “We’re just grateful for the opportunity.”

Rev. Ashley Tackett-Evans, Andrew’s pastor at New Beginnings, said one thing she was loving about the trip was the Conference’s connectional nature as people from different churches discovered common friends and colleagues – and she reinforced Hatton’s point on listening to survivors.

“It’s been impactful to hear their stories. It gives them the opportunity to share as the beginning stages of healing,” she said.

Fairley was part of a team installing ceiling tiles at a house on the eastern edge of Dawson Springs where a large tree limb had crashed into the attic during the storm. Minutes before he paused for a brief interview, he had put up his first ceiling tile, and he said it’s not necessarily the skill set that makes for effective work volunteers – it’s the heart.

“If our spirits are right, we can learn a lot,” he said. He added that Rev. Gary Baker – who coordinated the trip in his role as the Conference’s Volunteers in Mission (VIM) team coordinator – repeatedly reminds people that the physical work is important, but the spiritual work serving as Christ’s hands and feet is most impactful.
“That’s what compels us to come – it’s Christ,” Fairley said.

Baker, pastor at Greensburg UMC, said they started the week with 33 clergy and laity from across the Conference doing various cleanup and light repair work and would serve about 10 families by the end of the week. The volunteers were divided into groups of between two and eight and were deployed to various locations, mostly in Dawson Springs.

Baker said their work has pleased Joe Workman, who serves as the construction manager for the Hopkins County Long Term Recovery Group.

“This has been a great team down here this week,” Baker said, stressing that the rebuilding in the hard-hit southwestern Kentucky communities is just beginning. In 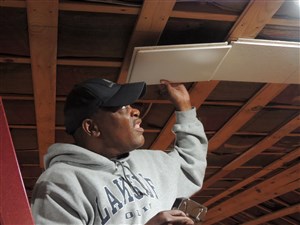 addition, in the next few months volunteer teams will be needed in southeastern Kentucky to help rebuild after devastating flooding in July. Forty deaths have been confirmed there.

“My hope is that people will go with this experience, talk it up, and then come back” for another mission trip, Baker said.

At another house, a team from Immanuel-Lakeside Park and Immanuel-Boone County that included Ken Kramer, Wayne Van Lierop and Sue Hill was applying primer to the walls of Daniel Kovach’s home, which was only about 10 houses away from the tornado’s main path. The house wasn’t badly damaged but needed some TLC.

“These people have done a really great job,” Kovach said. “I would recommend them to anyone.”

Kovach said they were at work when the storm hit and were very concerned about their dogs, one of which had a litter of puppies. All the animals were safe.
“When I got home and heard the dog barking, I just started bawling,” he said.

Kramer said the team’s work during the week was satisfying but emotional. “You take for granted what you’ve got.”

At another home, Revs. Karen Stigall and Janet Carden, members of the Appointive Cabinet, were taking advantage of the mild, sunny fall day by staining a homeowner’s wooden steps and railing. The owner’s previous home had been lost in the storm.

Stigall and Carden – superintendents of the Conference’s South East Kentucky and South Central districts, respectively – were fortunate enough to be working outdoors in the pleasant weather. It was also helpful for Carden, who is recovering from a broken ankle and is still in a walking boot – to have a job where she could sit. It reinforces the point that anyone with a willing heart can contribute to a work team. (Carden also had given the devotional that morning before the volunteers left Madisonville First.) 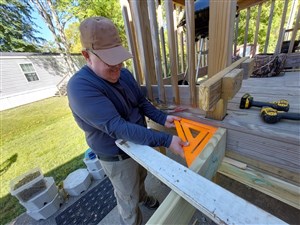 Another team that day was building a handicap-accessible ramp at a large mobile home park in Madisonville. David Pratt, a member of Shelbyville UMC who helps coordinate that church’s ramp ministry, said the owner had relocated from Dawson Springs but needed a ramp, so the team built one from scratch.

He said it was a bit more challenging than their typical work using premade kits. The work crew of half a dozen was close to finishing the two-day job around midday.

Other people on the crew included Doug Skaggs of Memorial UMC in Elizabethtown, Bill Tuttle, Trisha Hobbs, and Bill and Pat Short – Trisha’s parents who had recently moved to Louisville from Pennsylvania and had joined Watkins Memorial UMC the previous Sunday.

“When you lay your head on the pillow at night, you know you can rest well because you’ve helped someone else,” Pat Short said.

Sometimes there are tangible examples of the mission work – and perhaps validation from the Holy Spirit not only of their work, but community resiliency. Dawn Sparks Fairley, Bishop Fairley’s wife, posted on Facebook about finding pages from a tattered Bible that included this passage:
“I will sing of the Lord’s great love forever;
with my mouth I will make your faithfulness
known through all generations.
I will declare that your love stands firm forever,
that you have established your faithfulness in
heaven itself.” – Psalm 89: 1-2

‘ARE YOU READY FOR HARD WORK?’
That’s what 16-year-old Andrew Pence said when asked how his mission trip experience was going. But he also admitted that he was having a great time on his fall break.

Future mission trips will be organized, including at least one to southeastern Kentucky, probably early in 2023.

If you are interested in that or another mission trip, watch for details on the Kentucky Annual Conference website, www.kyumc.org, or contact Rev. Gary Baker, the Conference’s Volunteers in Mission coordinator, at pastorgarybaker@live.com.