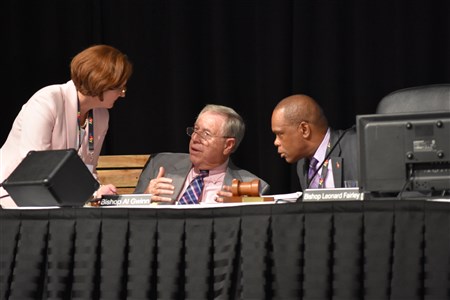 COVINGTON, Kentucky – The 2019 Annual Conference concluded late Wednesday with emotional and sometimes-painful debate on a petition and resolution related to LGBTQ policy, plus the election of clergy and lay delegates and alternates to the 2020 General and Jurisdictional Conferences.

The petition to remove incompatible language from the 2016 Social Principles failed 458-283.

The resolution to be a church of open minds, open hearts and open doors was approved 409-285, but only after the language was changed to remove language rejecting the Traditional Plan, which affirmed current church doctrine when it was approved at the special called 2019 General Conference.

The petition to the 2020 General Conference would have sought to “remove incompatible language from the Social Principles.” The resolution called for “a church of Open Minds, Open Hearts and Open Doors.”

There was even drama before the suspense of the final vote when a motion to vote by written ballot on the full resolution as amended failed by one vote.

The sponsors of the original resolution, Revs. George Strunk and Jean Hawxhurst, asked that their names be removed from the resolution after the amendment was passed.

Debate before the votes was passionate and often emotional.

“Being Methodist has never felt so difficult as it does today,” said Strunk, his voice breaking at times.

Rev. Bill Arnold, one of those who spoke against the measures, said that approving the petition would be “a major break with Christian tradition.” The church must not become a window into the larger culture, he said.

At one point, Bishop Leonard Fairley admonished the delegates not to clap. “No applause. We are going to do this in the spirit of Christ. This is not about winners and losers.”

General Conference 2020, to be held next May in Minneapolis, is all but assured to be dominated by further debate on human sexuality and the church’s policy on LGBTQ matters.

Starting Monday and concluding Wednesday, it took 15 lay ballots and 13 clergy ballots – this year taken electronically for the first time – to select delegates and alternates to the 2020 General and Jurisdictional Conferences. Elected were:

The memorial service honored 11 clergy and 14 clergy spouses who have died in the past year.

Rev. Tami Coleman, the incoming Conference Secretary, preached the message during the sermon. In keeping with the Lenten theme of Annual Conference’s worship services, the memorial service represented Good Friday.

“We stand here today because of them,” she said while talking to the families of those who have passed. “Grief is a lot like wrenchin’. My heart has been wrenched, and possibly yours has, too.

“Forsaken. Abandoned. Alone. That is how Jesus felt on the cross. When have you felt abandoned and alone? There are some Good Fridays in our lives that we just cannot make right. You are not alone. I am not alone. And we the church are not alone.”

Awards
Bishop’s Award for Ecumenism: Rev. David Miller, Chaplain of Union College. In prepared remarks, Rev. Lisa May said that in his role, he “ministers to students from a variety of backgrounds, the faculty, staff and members of the surrounding community.”

Harry Denman Evangelism Award: Rev. Maikel Rojas, pastor of TDA Church at St. Matthews UMC. In a celebratory Facebook post, Rev. Adam Sparks, St. Matthews’ Senior Pastor, said the award is “one of the highest honors given by our Annual Conference and I’m so proud of what God is doing through him at TDA Church!”

Because of time constraints, the award presentations were not included in the plenary session.

The bishop announced the results of two offerings: Service of Sending Forth

During the service, pastoral appointments for the coming year starting July 1 were read.

The bishop announced that Annual Conference 2020 will be June 8-10, again at the Northern Kentucky Convention Center in Covington.