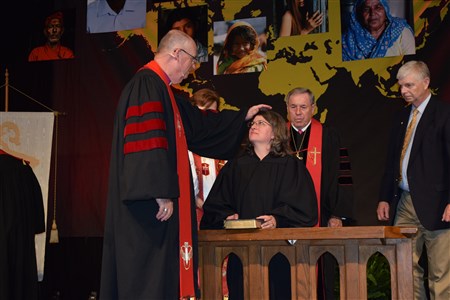 Laity Session
The Laity Session was opened by Clyde Tharpe.  Lew Nicholls, Conference Lay Leader, presented a report from the Board of Laity and on General Conference business and notes.  He discussed the newly forming commission that will be developed to explore the United Methodist Church’s stance on homosexuality and encouraged the Kentucky United Methodist Church to stay unified as we seek God’s direction.

Steven Wells, UK Wesley Foundation director presented a heartfelt look at the importance and discipleship focused impact that campus ministries bring to future generations. He encouraged churches and individuals of the Kentucky United Methodist Church to “PIN” which stands for “Pray”, “Invest”, and “Nurture”.  There has been an overwhelming support of campus ministries; however, as a new generation enters college we are called to identify the unique landscape in which they live in order to develop new ways to invite them into a loving relationship with Christ.
Information on Jurisdictional Conference was presented by John Denham.

Gina Lyons talk “Who Are the Poor?” provided a unique insight as to how we can identify and come into real and dynamic relationships with the poor. Rather than assuming that the poor are those who are economically or socially disadvantaged, she reminded us that the poor come in many forms. We must be aware that spiritual poverty exists in the lives of the wealthy and the economically destitute. She encouraged the laity to live lives of compassion and to be attentive to the spiritual and physical needs of those who inhabit every corner of society.

Clergy Session
A Clergy session was held today and so well attended that the space was overflowing with clergy!

Fellowship
Several fellowship opportunities were provided over lunch with the Clergy Spouse Luncheon, the Ordinands Lunch with Bishop Davis, and the Trustees Luncheon. Jennifer Davis spoke at the Clergy Spouse Luncheon which is an opportunity for spouses of KYUMC clergy to connect, invest, and share in each other. Bishop Davis spent lunch with this year’s ordinands, spending time in fellowship and mentorship.

Worship and Memorial
Bishop Davis provided a sermon on mission and relationship which was well attended. A Memorial Service was held for clergy and clergy spouses who have passed way during the past year. A Memorial reception followed, allowing friends and family to celebrate the life and legacy of those who have passed on. 16 clergy and 10 clergy spouses were recognized in memorial.

Plenary
During the Plenary session the budget for Fiscal Year 2017, nominations, and rule changes were presented.  Some key features of the budget covered were the impact of changes in funding of extension ministries, debt reduction, and the Kentucky Annual Conference’s ability to give its full apportionment to the General Conference.

Tom Grieb was announced as being the approved Episcopal candidate from Kentucky. It was also announced that Gary Graves was selected as the Secretary of General Conference.

Todd Love, District Superintendent of the South-Central District shared about the impact of Bowling Green Community and shared about Tip cards.

Bible Study
Rev. Larry Stoess offered a challenging and dynamic study on the life of Christ in the context of mission and relationships. He challenged the church to engage in a downward mobility rather than an upward mobility. Rev. Stoess described downward mobility as a mirror of God descending to the world and living among not only mankind but the poor and outcast. As Christians he encouraged us to set aside our comfort, privilege, and attitudes in order to be present and genuinely serve those in need through relationship. He challenged the church to recognize that the poor are those whose value is not based on being an object of charity, but as God’s precious creation.

Ordination Service
Bishop Davis preached from 2nd Timothy 4:1-6. His sermon was titled “Keep the Gospel Alive”. He charged new ordinands and commissioned clergy to keep the truth of the Gospel alive in their lives, ministry, and relationships. Ordinands/Commissionees were reminded that they are called to serve rather than be served.

There were two deacons ordained. They are Brandon Lee McGinnis and Laura Ann Messamore.