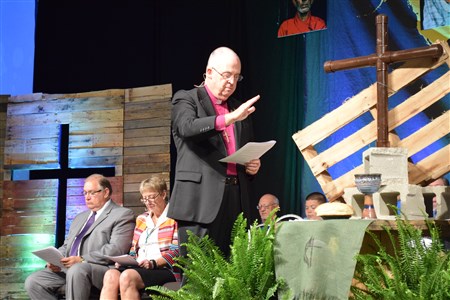 Plenary
Plenary began with Bishop Davis giving the call to order. Several reports were given including two from David Garvin on the Journal Committee and the Higher Education Team. Tami Coleman shared about Connectional Café. Military Chaplain Major Shawn Gee represented and discussed clergy who serve in our military.

Tom Smith made a proposal to amend the wording of the pension report in order to remove the single health insurance premium cost for clergy who are approved for long term disability leave.

Becky Jones, Chair of the Board of Trustees presented a trustees report which was approved.

Recognition was given to Becky Sergent and Robin Ciochetty who lead volunteer organization for annual conference session.  KAC office staff, the Worship and Design Team, Good News TV, Registrars, Gary and Jennifer Graves, conference assistant secretaries, and those who served on the platform were recognized for their commitment and hard work at this year’s conference.

A report for Afternoon of Service was given by Julie Hager Love. 400 service volunteers were able to reach 38 sites in the Bowling Green area, write 225 Agape letters to our military, and assemble 1,742 health kits for UMCOR.

We received a report of the offering that was taken at the Ordination service Monday night. A total of $3,035 was raised for the Isaiah Project
Owen Dolin, Dean of the Cabinet reported on church closings and mergers.

Mission
Bling for a Blessing sells continued on Wednesday, June 15th and brought in approximately $3,400 for the Red Bird Missionary Conference.

Communion & Commissioning
Communion and commissioning began at 2pm. Bishop Davis announced new appointments across the nine districts. District lay leaders issued a prayer for those moving, and the congregations that will be in transition next week as they say goodbye to their current ministers and embrace their new ministers. Organization of Conference Boards, Committees and Agencies were also approved.

Upcoming
Next year’s annual conference will be June 12th through the 14th in Bowling Green, KY.