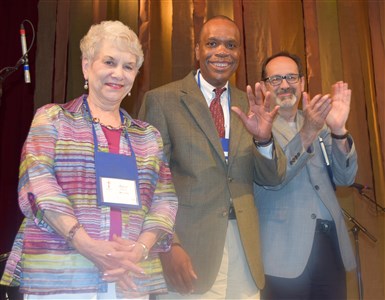 Bishop-elect Fairley was the episcopal nominee from the North Carolina conference. He was elected Wednesday afternoon, July 13, on the seventh ballot.

Bishop-elect Fairley wants the people of the Kentucky Conference to know that he “believes in possibilities and living in the promise.” He considers himself a leader in the mold of Joshua and Caleb, “leaders who see the promise land and believe that God has given it to them.”  He feels that the people of the Kentucky and Red Bird conferences can be an “unstoppable force for the Kingdom of God.”

In addition to being a strong man of God, Fairley also has a creative side. He has published a book of poetry, “Who Shall Hear My Voice.” He also was a contributing writer to “The Day the Earth Moved Haiti: From Havoc to Healing.”

He was married to his lifelong soulmate, Priscilla Ann Russell, before she died in 2013. He has two adult children, son Joshua Fairley and daughter, Elizabeth Galbreath. He is also the proud grandfather of three grandchildren.

A welcome reception for Fairley and his daughter was held at the Lambuth Inn.

Fairley will become one of 13 active bishops serving the Episcopal areas of the 15 annual conferences that make up the Southeastern Jurisdiction.