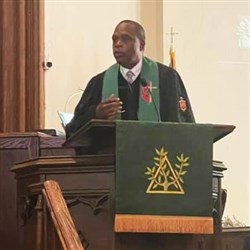 “What an amazing milestone you have reached. You don’t get to 100 years of ministry by accident,” said Fairley, who traveled to Ashland this weekend with his wife, Dawn, from the Raleigh, North Carolina, area. Fairley is in his first month of an interim stint as bishop of that conference, as well as his position in the Kentucky Annual Conference and the Red Bird Missionary Conference, and is dividing his time between the two states.

During his sermon, Fairley noted that God takes ordinary people and allows them to do extraordinary things – and that Ashland First, with its rich history, is no exception.

The Bishop told congregants that it’s OK to be nostalgic about the past – but also important to acknowledge that we serve a Good who is doing new things.

He concluded: “Be the people that God has called you to be. Amen.” 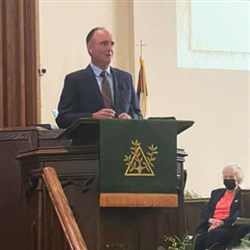 Fairley was introduced by Rev. Brad Smart, District Superintendent of the Kentucky East District. Ashland First is part of that district.

Sunday’s commemoration, which was also streamed by the church on Facebook Live, was the culmination of a celebration over the past several Sundays that featured several former pastors.

The church is known locally as “the chocolate church.” According to the church’s website, the community gave it that name because of the dark brown sandstone used on the church exterior. The church’s cornerstone was laid in 1919.

“The stone for the new building came from Hummelstowne, Pennsylvania; the roofing slate from Bangor, Maine; the art glass windows from Louisville, Kentucky; and the Estey organ from Brattleboro, Vermont,” according to the church’s website. “The bell, which has been calling the congregation to worship for almost a century, was presented to the congregation by Captain H. S. Davis, a famous riverboat captain. Cast in Louisville, it had been used on one of the most handsome steamboats plying the Ohio and Mississippi Rivers. It was moved from the old building to the new church where it remains today.” 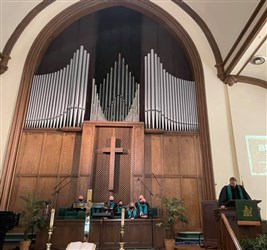 The church remains active in serving the Ashland community as it embarks on its second century of making disciples of Jesus Christ – a point that Senior Pastor Jeff Bramel made in his benediction Sunday: “God has done great things in this place, and he is not done yet.”
More online