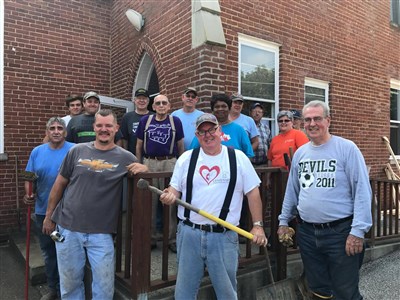 It’s no secret that Bishop Leonard Fairley is passionate about the church’s response to natural disasters. And Jim Morse is more than happy to sing from the bishop’s hymn book.

He and the bishop recently toured the northern Kentucky area devastated by flash flooding in late July. Two UMC churches, Trinity in Augusta and Strawberry in Flemingsburg, were hard hit, and damage across the area was widespread. Morse recalled that during that tour, the bishop said something that really struck a chord with him: If there is a United Methodist Church in a community, there is no reason there shouldn’t be a fast and effective response.

It’s not that the church hasn’t been willing to help, but this new effort is an attempt to “become more intentional and prepared,” Morse said. The bishop said basically the same thing in an interview. “We’ve been mainly reactive rather than proactive.”

Both the bishop and Morse said improvement means mobilizing not just district disaster coordinators – each district in the conference has at least one – but getting the word to individual church pastors and lay people with an interest in and passion for disaster ministry. Ideally, Bishop Fairley said, every church across Kentucky should have a representative involved with disaster response.

The bishop said it’s much easier to generate excitement around an international relief trip, or a national response, such as the mission trip he led to Lumberton, North Carolina, back in the spring to help a region that was ravaged by a hurricane in 2016.

Morse said Bishop Fairley has taken a very active role in disaster ministry, both here and abroad. He has put out the vision, hoping that individual churches will buy into it. Over the next several weeks and months, Morse and the districts’ disaster coordinators will be working with district superintendents and individual churches to push for a more consistent and coordinated response. Bishop Fairley said relief means a two-pronged approach: financial assistance and work crews that could be mobilized quickly.

Pastors need to be involved, but disaster relief should be a laity-led effort, Morse said.

The damage in Flemingsburg and Augusta was not limited to the UMC churches, of course, and the conference’s response to disasters should be prepared to provide relief to both suffering church congregations and the community at large, Morse and the bishop said. Among other things, that means working closely with other religious denominations and emergency responders.
Disaster ministry doesn’t just mean younger, vigorous church members who can climb across roofs or wield chain saws for hours and days on end. Older volunteers can provide spiritual and logistical help, Morse said. “You could be 17 or 70,” he said. “In disaster ministry, we can find a useful and effective ministry for just about anybody.” He said “there’s a wealth of things that can be done.” But it starts with individual families being prepared for the unexpected so that they are survivors, rather than victims, Morse said.

Eventually, the conference likely will have to find more money to devote to disaster ministry, he said. But for now, he and others are encouraging each district to develop a plan so that individual churches aren’t unduly burdened, Morse said.

Ideally, districts would come up with a plan that at least meets minimum criteria for preparedness, Morse said. They also should be prepared to assist outside of their districts as needed, playing to their strengths. For instance, districts in northeastern or eastern Kentucky would in theory be more prepared to deal with flash flooding – something that districts in the central and western parts of the state would be less familiar with.

Morse and other people in the conference are gradually getting the word out. As a society, we’re inundated with information, he noted, and the best way to build coalitions – face-to-face meetings – is also the most cumbersome way. That means the effort will remain a work in progress, he said. “We need to make it a ministry, and a viable ministry … and something we do on a daily, weekly, and monthly basis.”

HOW TO HELP
Do you have an interest in becoming involved in disaster ministry? Jim Morse recommends that you talk to your pastor and ask: “What can we do to be better prepared?” Then contact your district office and district disaster coordinator – your church will have that information – and start putting together your plan. The bishop’s vision is eventually to have at least one disaster ministry representative at every church.