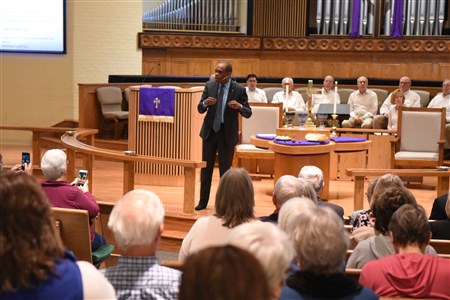 LEXINGTON, Kentucky – The United Methodist Church must never stop being a welcoming people, regardless of our personal makeup, background or beliefs, Bishop Leonard Fairley told lay members from the Kentucky Annual Conference at a meeting Saturday.

The gathering – which was more worship service than meeting – was called so the bishop and delegation leaders to the specially called 2019 General Conference could react to the recently concluded legislative session and what it means for the future of the UMC.

“You have no idea how difficult it was to sit on that stage” at General Conference in St. Louis, Fairley told the gathering at Southern Hills UMC in Lexington.

The meeting-service, which included Holy Communion and a time for anointing and baptism remembrance, lasted about two hours and 15 minutes. Between 250 and 300 people attended from around the KAC and another 100 plus watched online. The meeting for laity was held in conjunction with similar meetings Friday and Saturday that the bishop and his team held with clergy.

The bishop’s sometimes-passionate remarks to the laity, which drew a number of “amens” from congregants as he spoke, were not intended to rehash 2019 or look ahead to General Conference 2020 in Minneapolis, the bishop said. There have been many words spoken and written on various sides of the debate over LCBTQ inclusion in the church – “but please, not at this moment,” Fairley said.

No one knows yet what God will birth from the current chaos, Fairley told congregants, but he noted that the Lord has an extraordinary way of birthing great things in the midst of chaos.

“I am concerned with the hurt and the pain this (debate) has caused,” the bishop said. “Therefore, I am calling on all of our clergy and laity to draw on the deep wells of compassion.”

He urged a halt to all the painful things posted on social media.  “I can hold my convictions without demonizing the other. I have always lived that way. Because as an African American, I know what it is to be demonized. I know what it does to the soul. And friends, the price is too high.”

Some of what happened at General Conference was un-Christian, the bishop said. “I’m heartsick, frustrated, and there was a point I was angry. You’re my family, and I’m being confessional with you.”

He recalled having to let go of his first wife, Priscilla, before she died and say, “Honey, it’s OK to let go.” The same may be true of where we are in the UMC, but he doesn’t want to take this journey by himself. “I need my family – and you are my family.”

Earlier in the meeting, the co-chairs of Kentucky’s delegates to General Conference, Rev. Dr. Bill Arnold and retired Judge Lew Nicholls, offered brief remarks from their experience in St. Louis.
Nicholls, who was a practicing judge in Kentucky for 29 years, reviewed some of the key pieces of legislation approved by the roughly 850 UMC delegates from around the world and also said that many of them probably will be declared unconstitutional by the church’s Judicial Council and will have to be revisited at the 2020 General Conference.

During his remarks, Arnold went through a brief history of the current debate over LGBTQ inclusion, concluding with the decisions made in St. Louis to affirm the Traditional Plan, essentially preserving the church’s restrictions on ordaining practicing gay clergy and performing same-sex weddings but affirming that all people, regardless of sexual orientation, are welcome in the UMC.

“What we saw at the General Conference on full display was the loss of a shared commitment” to believe and act as one church, Arnold said. Human sexuality is only one of the areas of differences between the two coalitions, he said.

Whatever happens in Minneapolis in 2020 cannot be a repeat of what happened in St. Louis, Arnold said. But he, Nicholls, and the bishop all said they don’t yet see what it will look like as the church seeks to find its way forward. Witness and ministry are being hampered, Arnold said, but his hope is that “at this juncture, God is allowing The United Methodist Church to do its own thing,” whatever form that eventually takes.

During a brief question-and-answer period, several people asked various questions ranging from possible voting irregularities with one of the petitions involving disaffiliation to whether churches can leave the UMC. A few of the comments and questions were sharp, reflecting the raw emotions over the LGBTQ debate.

Arnold and Nicholls both said they have heard of discussions involving one compromise proposal that was barely considered in St. Louis, the Connectional Conference Plan. If its complexities can be sorted out by September 2019 – the deadline for petitions to be considered at GC 2020 – it could pave the way forward for the church. But it’s way too early to say for sure what might happen, they said.

Photos from the laity meeting