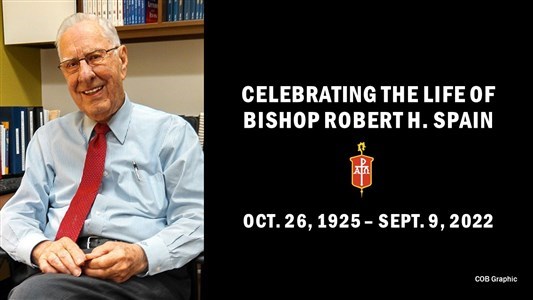 Bishop Robert “Bob” Hitchcock Spain, a retired Bishop of The United Methodist Church, passed away on September 9, 2022, at the age of 96.

He was elected a Bishop in the United Methodist Church in 1988 during the Southeastern Jurisdictional Conference (SEJ). He served the Kentucky and South Carolina conferences. After his retirement he served as chaplain for the United Methodist Publishing House in Nashville until 2016.

Bishop Spain served the Louisville Area from 1988 to 1992, which comprises the Louisville and Kentucky Conferences and also the Red Bird Missionary Conference. He retired in August 1992 and began teaching clergy and laity through the Focus on Ministry seminar sponsored by The United Methodist Publishing House in Nashville. Upon the untimely death of Bishop Joseph B. Bethea in South Carolina, the SEJ College of Bishops assigned Bishop Spain to the South Carolina Conference. This assignment ended in August 1996.

Bishop Spain was born in Loretto, TN. At the age of 17 he enlisted in the US Navy. He served the Navy in the medical core in the South Pacific during WWII. After the War, Bob attended the University of Tennessee (Knoxville) and graduated from the University of North Alabama. Following his graduation, he and his wife began his career as a Methodist minister and enrolled at Vanderbilt Divinity School while serving Spring Hill Methodist Church.

At the time of his election to the episcopacy in 1988, he was the Senior Minister of the 3,200-member Brentwood United Methodist Church.

Bob will be remembered as a loving husband, father, grandfather ("Daddy Bob") and great grandfather, friend, and devoted pastor to many. He enjoyed woodworking, gardening, music, and travel over the years. Through his life he blessed so many with his care, prayers, and numerous handwritten notes. He was a faithful servant to the church and everyone he met.

Interment will follow immediately after the service at the Brentwood United Methodist Church columbarium.