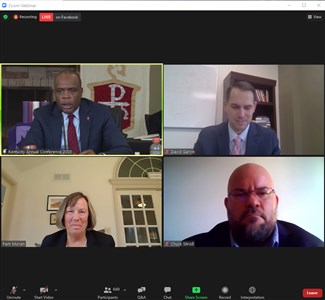 Members of the Kentucky Annual Conference wrestled with a proposal to require clergy and laity training to combat racism across the Conference, at one point tabling the motion before returning it to the floor and voting to proceed with it.

That was among the deliberations approved Tuesday during the “worshipful work” portion of the 2020 Annual Conference, which met virtually six months later than usual because of the COVID-19 pandemic.

“I appreciate the work that was done to address the critical issues the church is facing in a gracious way,’ Rev. Tami Coleman, Annual Conference Secretary, said after the meeting. “Having those discussions are difficult no matter what the venue, but being virtual makes it even more challenging, and I am thankful for our Conference for engaging in such a wonderful way.”

Things went extremely well, particularly given the unique situation of having to meet virtually, added Coleman, who also serves as pastor of Hanson UMC.

Bishop Leonard Fairley added: “I am grateful for (members’) patience and understanding when we had to deal with difficult issues, but they did well.”

Fairley, Coleman, and several others worked in person, socially distanced, in a makeshift studio assembled at the Conference headquarters in Crestwood by GNTV, Conference Communications, and supporting tech staff to transmit Annual Conference to lay and clergy members across Kentucky.

Opening clergy and lay sessions were held Sunday; Tuesday’s all-day meeting was to conduct a pared-down version of the business portion. Annual Conference normally meets for three days in June.

Anti-racism debate
A motion to pave the way for anti-racism training for clergy and lay members was approved 474-274 after a lengthy debate that started during the morning session and was resumed after lunch. It was initially delayed so Conference financial staff and teams could consider the financial ramifications of providing such training.

The second motion, to provide mandatory annual anti-racism training for all clergy and laity, was delayed until the afternoon to give Conference financial teams time to identify money that could pay for such training.

Rev. David Garvin, Conference Treasurer, met remotely with the Council on Finance and Administration during the 30-minute lunch break. He reported back that CFA members did not have sufficient information to determine the cost and wanted to refer the motion to Ministerial Services and Connectional Ministries, with CFA committing to bring appropriate financial resources once a formal plan is in place.

Everett said he saw that decision as a “friendly move” and asked to work with the Conference on it.

Members voted 326-269 to table the measure. However, Fairley added that the action doesn’t prevent the Conference from continuing to work against racism and strive for racial reconciliation.

Although not directly related to the debate on anti-racism training, Rev. Dr. Kathy Goodwin, chair of SBC21, presented a verbal report decrying and condemning racism and called for the Conference to combat it in all its forms. Members voted 439-20 to approve SBC21’s report, which had earlier been pulled from the Consent Calendar to be considered separately.

But a short time later, a motion was entered to resurrect the measure, leading to the final 474-274 approval. It allows Ministerial Services, under the direction of Rev. Kevin Burney, and Connectional Ministries, under Rev. William Moore’s leadership, to direct their teams to begin working on the training plan and report back in June during the 2021 Annual Conference.

Other action during Tuesday’s business meeting:

Kavanaugh sale
The Conference voted 548-66 to allow the trustees to proceed with the sale of the Kavanaugh Conference and Retreat Center, which is in Crestwood adjacent to the Conference headquarters. Kavanaugh operations were suspended in the late spring because of financial challenges.

Garvin and Tom Coe, Chair of the Board of Trustees, said Conference officials reluctantly decided back in the spring that the sale was necessary. Kavanaugh cash flow in the short term and its long-term prospects were not favorable, they said.

All operations and programs at Kavanaugh were suspended in the spring pending approval by Annual Conference to sell the property.

The eventual sale will involve 38 acres of camp property but will not include Fanelli and Holloway Halls, which will remain part of the Conference Center. Revenue from the sale will be used to strengthen Camp Aldersgate and Camp Loucon and Camp & Retreat Ministries as a whole.

The next step is to commission title research, surveying and other work before the property is offered for sale, Coe said.

General Conference delegation
The Conference heard a videotaped report from Rev. Dr. Bill Arnold, Chair of the Kentucky delegation for General and Jurisdictional Conferences. Those conferences have been delayed from 2020 until late 2021 because of the pandemic.

He said it’s too early to know whether the pandemic will have eased by then and allow in-person General and Jurisdictional sessions. Work is underway on whether and how virtual meetings might take place if necessary, he said. Conference Chancellor Courtney Preston Kellner is part of the team doing that work.

Besides the leaner budget, the major change is that the new apportionment schedule will drop to 10% from 11%. Conference staff pay is frozen and a hiring freeze is in place. The budget does allow ministry areas to increase by 8%, however.

Garvin and Fairley expressed thanks for continuing commitment by churches in meeting their missional covenants, even in the face of the pandemic and related financial hurdles.

Retirees
A video was shown honoring those who retired effective at the end of the Conference year in June:

Memorials
A video was shown honoring the clergy and spouses who passed away during the Conference year.

Mission Offering
The Mission Offering for 2020 will support seven mission agencies that have traditionally been supported by the Conference: Hillcrest Bruce, Ida Spence, The Foundry, Nathaniel Mission, Portland Promise, Wesley House, and Lighthouse. Ten percent of the offering will go to support the work of the United Methodist Church in Serbia.

Miscellaneous 2021 Annual Conference
Conditions permitting, the 2021 session will be held in Owensboro June 7-9, 2021. The Conference’s Program & Arrangements Team will decide early in 2021, based on the status of the pandemic and vaccines, whether to meet in person or virtually.

Fairley and Coleman did, however, express cautious optimism that Annual Conference will be able to be held in person again.