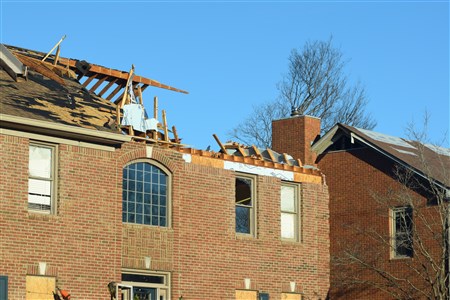 BOWLING GREEN, Kentucky – The sun shone brightly through the stained-glass windows of Broadway UMC’s Melrose Campus on Sunday, Dec. 12, as worshipers gathered for the 8:15 a.m. traditional service. But the mood inside was much more somber than the beautiful December weather outside.

Not 36 hours earlier, a powerful tornado had torn through this south-central Kentucky college town – home of Western Kentucky University – leaving at least 11 people dead and hundreds of homes and businesses destroyed.

In the wake of the devastating storms that hit overnight early Saturday, church leadership decided to shift plans for Sunday’s services at both the Melrose and Greenwood campuses and schedule a time of prayer – in the words of Senior Pastor Adam Shourds, a chance “to rest in the moment of God’s mercy and care.” The special Advent music was moved to next Sunday.

A similar last-minute shift took place a few miles away, at State Street UMC, where Senior Pastor Craig Tuck and his team decided to go with a pared-down version of the Christmas cantata to allow plenty of time for focused prayer.

Mercifully, neither pastor was aware of any injuries among their congregants, although a number of congregants’ houses had been badly damaged or destroyed.

A team from Kentucky Annual Conference Communications spent most of the day in Bowling Green and attended services at both churches. Here are brief summaries:

Broadway (Melrose)
Before the service, Shourds and other worship team members were greeting worshipers as they arrived. 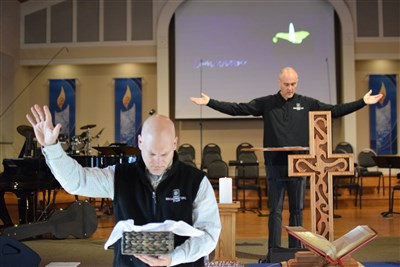 “Did you have to crawl over a tree to get here?” Shourds asked one man whose house had a fallen tree on it. He hugged the man, who broke into tears as he described the situation at his home.

During the service, Shourds recalled the aftermath of the Sept. 11, 2001, attacks, and the comforting words of Psalm 23, which the congregation recited: “The Lord is my shepherd, I shall not want. … Yea, though I walk through the valley of the shadow of death, I will fear no evil, for thou art with me.”

During his brief devotional, Shourds said there were no real words of wisdom or comfort that he could offer for such a time as this.

“The rebuilding of our beloved town will take awhile, and the grieving of loss will take awhile,” he said. His voice choking slightly, he said that given the choice of where to be at that moment, it would be Bowling Green and the Broadway family.

“Where does our help come from?” he said. “Our help comes from the Lord, the maker of heaven and Earth. And his help comes to us in so many ways.” Those ways include pastors who have reached out from across the country to check on them and to assure him that the city is in their prayers, he added.

Shourds also thanked the congregation for checking on each other and also for starting the relief process.

Referring to church staff losses in recent years – Rev. Wayne Hunter to cancer and staff member Megan Davidson to a horrific traffic accident, both in 2019 – Shourds reminded the congregation: “We were made to do hard things. We can do hard things.” 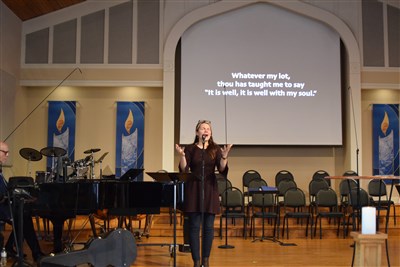 He cited two examples of church members’ spirit. As they were checking on congregants and damage Saturday, one man had specifically worn a shirt that said, “We Can Do Hard Things.”

The other example is a member who celebrated her 103rd birthday this past week. Shourds was at her house during the celebration. During the storm, a tree fell on her house. Shourds was back at her house Saturday to see the damage, and she told him, “I’m so sorry I won’t be in church tomorrow.”

The congregation also took part in Holy Communion, then sang the closing hymn: “It Is Well with My Soul.”

State Street
The church leaders had planned for the church choir and orchestra to do “A Christmas Promise,” by Lloyd Larson. But after the devastating storm, they quickly shifted gears and focused on only the Advent portion of the cantata, shelving the Christmas and Epiphany portions.

After the service, Tuck said it was a difficult decision, particularly since the choir has been planning the cantata since before the COVID-19 pandemic. But he said it was the right decision to focus on the Advent, or “coming,” message at this time.

Before the abbreviated music program, Tuck led a time of focused prayer, giving the congregation the opportunity to share the names of people who had lost homes and belongings and others affected by the storm.

Tuck got briefly choked up while talking about people who had lost homes. Up to half a dozen church families likely will need to rebuild, but Tuck said they are blessed that they are “shaken but safe and well.”

He also cited the fifth chapter of James, singling out the passage calling for patience during times of suffering. (“As an example of suffering and patience, brothers, take the prophets who spoke in the name of the Lord. Behold, we consider those blessed who remained steadfast” – verses 10-11.) 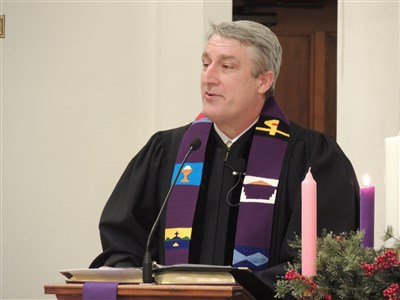 “Indeed,” Tuck said, “our community today is sick with grief.” He urged worshipers to “listen to God to speak” during the service. During the intentional prayer time, he mentioned other areas struck by the storms, including Mayfield in far western Kentucky, where the town of about 10,000 was virtually flattened and dozens of people are feared lost.

As the service concluded, Tuck thanked those who had already brought relief supplies and assured people that they would be distributed to those in need. Congregants didn’t rush out afterward, lingering to chat with each other, and also checking on one another.

As two men chatted, one mentioned to the other: “At least we’ve got electricity.”

WHAT’S NEXT
Rev. Mark Dickinson, the Superintendent of the Conference’s South Central District, planned to meet Monday with his pastors to begin to form a coordinated plan for providing relief, in coordination with other area churches, agencies and the Kentucky Annual Conference. Early details on how people can help can be found here.

View a photo gallery of a Day in Bowling Green