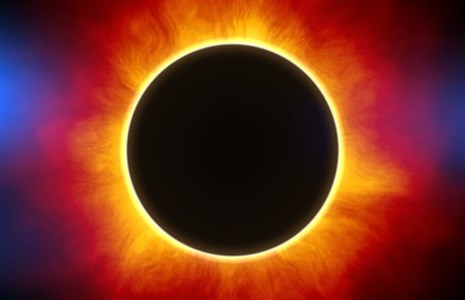 The moon will be blocking the sun for a few brief minutes Aug. 21, but that’s when the spotlight will shine brightly on the Pennyrile District, particularly Hopkinsville – ground zero for the total solar eclipse.

UMC churches in Hopkinsville and the surrounding area are finding ways to use the rare celestial event not only to celebrate God’s wonder, but to use it to promote their churches and take part in the festivities as much of the world turns its eye on the southwestern Kentucky city of 32,000. The region is expecting an influx of 100,000 to 200,000 visitors over the weekend.

At First United Methodist Church in Hopkinsville, banners will welcome worshippers on Sunday, the day before the eclipse, Senior Pastor Paige Williams said. In addition, all three services will feature a blessing of the eclipse and focus on “what it means for God to be the creator of everything,” Pastor Williams said. The church is allowing the Red Cross access to its ice machine Monday, she said, and also will open the church’s roughly 150-spot parking lot to the public for free. Then Tuesday, church members will pitch in to help clean up the county fairgrounds, she said.

David Banister, pastor of Pembroke and Herndon churches outside Hopkinsville, said Pembroke is planning an old-fashioned ice cream social at a town park on Saturday from 6 to 7:30 p.m. Both his churches are actively involved in regular events to try and grow their congregations, and the excitement surrounding the eclipse is a prime opportunity, Pastor Banister said. “We’re going all-out for this (ice cream social), hoping we can draw people in,” he said. “… We think it’s going to be successful.”

Ogden Memorial UMC, between Hopkinsville and Land Between the Lakes, is planning a potluck on that Sunday after worship service, Pastor Shannon Blosser said. The church also ordered 200 pairs of solar eclipse safety glasses to distribute, he said. The church is choosing to largely turn its focus inward because of the uncertainty and apprehension surrounding the gigantic crowds anticipated, Pastor Blosser said. “We really don’t know what to expect” with the tremendous influx and potential traffic gridlock, he added. He plans to use the eclipse as a motif for his sermon that Sunday, focusing on how we sometimes have to get beyond what we see in front of us to see the truth of Christ.

Jack Larwa, pastor of Eddyville UMC, said two fundraisers are planned over the weekend in conjunction with the eclipse: a women’s group fish fry Friday evening and a men’s group pancake breakfast Saturday. Then Sunday night, a spaghetti dinner is planned in the fellowship hall and viewing glasses will be distributed. The day of the eclipse, the area will be cordoned off and for $10 a person, the church will provide box lunches, dessert, water, viewing glasses, parking and access to the facilities. The goal, he said, is to “try to be as hospitable and helpful as we can be,” providing a “welcoming face from the church.”

Pastor Janet Carden, of St. John UMC in Hopkinsville, said her church hasn’t focused heavily on the eclipse, opting instead for “church as usual and trying to get on with the normality of life.” They are, though, sponsoring a craft fair for the Red Bird Mission, and part of the reason this weekend was chosen was to take advantage of the eclipse and resulting crowds. The Red Bird Mission people then are planning to stay in town until Monday to see the eclipse, Pastor Carden said. But in general, the church is playing it low key and bracing for heavy foot and vehicular traffic. “I think most of the people here are more worried about the grass than anything,” she said.

Indeed, although many of the UMC churches in the region are planning weekend events in conjunction with the eclipse, a good number will actually be closed on that Monday. “If we have 200,000 here for the eclipse, we won’t be able to get here” to the church, First UMC’s Pastor Williams said.

During the exciting but potentially disruptive weekend, Pastor Blosser of Ogden Memorial is keeping his sense of humor. “I’ve been trying to talk my praise team into playing ‘Total Eclipse of the Heart’ at church Sunday, but I don’t think they’re going to do that,” he joked.

FACTS AND FIGURES
A few details about the eclipse, courtesy of astronomy.com: