Conference Pastors Gather to Hear About How to Live Extraordinarily 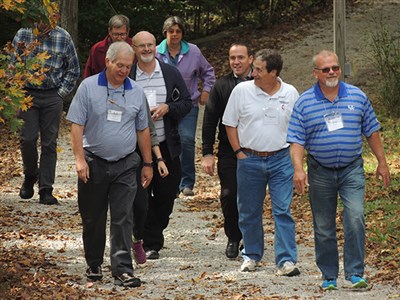 – and better serve their congregants

Clergy spouse Sue Brunk was teasingly blunt about why she wanted to attend the HC3 Extraordinary Living Academy this week in Crestwood.

“He doesn’t know anything about retirement,” she said, pointing to her husband, Pastor Jamie Brunk, of West Liberty United Methodist Church. “So I insisted he bring me along.” 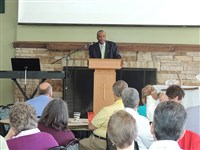 The Brunks were among about 65 clergy and spouses from the Kentucky Annual Conference who attended the EL Academy, sponsored by the Conference Board of Pensions and Health Benefits and held Monday and Tuesday at the Kavanaugh Conference and Retreat Center.

Jamie Brunk, who said he is eyeing retirement in the next few years, took his wife’s teasing in stride. He said both of them were pleased with the sessions, which featured information on financial, physical and spiritual well-being.

“It’s great,” he said, adding that the EL Academy was also a chance to “reconnect with old friends and a chance to make new ones.”

That type of fellowship time was one of the goals that coordinator Celeste Doll had in mind when she put the program together. Doll, who serves as benefits administrator for the conference, said Wespath – the conference’s health and retirement benefits provider – has held similar events in the past, but many clergy had asked about having one in a more geographically convenient location. 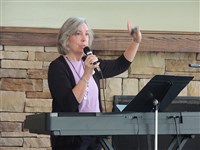 “This is the first time we’ve ever undertaken this endeavor, so I was very excited about the quality of speakers and presenters who signed up for this event,” Doll said.

Participants were able to choose from various areas, including financial planning, retirement and holistic personal and financial health, individual consultations, and eating and learning about healthful meals and snacks. The HC3 part of the Academy name stands for Healthy Clergy, Healthy Congregations and Healthy Communities.

Doll said most of those who attended were in the 55-65 age range and starting to think seriously about retirement, although the EL Academy was promoted for all ages. In her work as benefits administrator, she’s discovered that many people don’t really look at retirement finances till they’re in their late 50s or even 60s.

“That can lead to some startling revelations to wait that long,” Doll said. 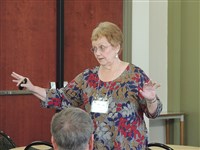 The keynote address Tuesday morning was from Bonnie Crandall, a Lexington counselor and motivational speaker with deep United Methodist roots. It was titled, “You Are a COGPOW,” which is her acronym for Child Of God, Person Of Worth. Her point was that self-care is a biblical tenet and that pastors can best care for their flock if they are first taking care of themselves.

“You are important to God,” she told participants. “Therefore, you are expected to be important to you. You are best when you are at your best.”

The order of living should be God first, yourself second, and others third, she said. “You’ve got to know your value in the eyes of God to see the value of your neighbor.”

The Brunks, who were interviewed Monday on their way to the session “Are My Affairs in Order?” by David Bowles of the Kentucky United Methodist Foundation, were excited by the chance to take part in the EL Academy. So were other conference clergy. 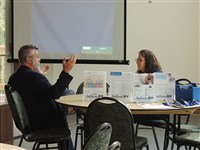 Kevin Brown, of Hanson UMC, said some things should be “required reading” every four to five years, such as refresher courses on personal finances and also pastoral profiles for new church congregations. This is his first year as Hanson pastor.

“There isn’t a better place to get this sort of information,” he said of the EL Academy, adding that personal and financial well-being are indirectly crucial for making disciples. “If you don’t pay the bills, nothing else happens.” 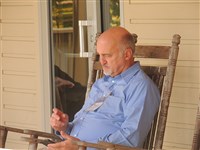 Pastor Bruce Hiner, of Hodgenville UMC, said he was pleasantly surprised at the variety of breakout sessions offered. “That certainly helps the day go faster and also gets us some good and useful information.” 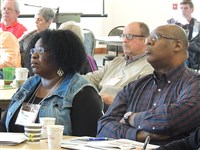 Pastor Alvin Goodwin, of Garrs Lane UMC in Louisville, said he’s planning to retire very soon – in 2018. “I need advice on moving companies, or something,” he said, laughing.

At 29, Cory Murashige, of new Castle UMC, was one of the younger pastors at the EL Academy. But it’s never too early to start planning for retirement and learning the benefits of long-range planning. 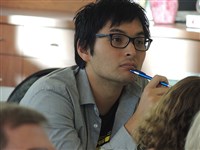 “I’m just beginning,” he said. “My mind isn’t fully aware of what retirement benefits are.”

He, as well as the others, said they were pleased with the Academy.

“I love the food,” Pastor Murashige said, laughing. “I love the sessions, too.”