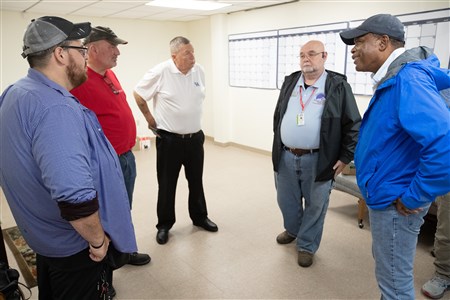 Throughout the Aug. 5 tour of flood-ravaged Eastern Kentucky, Bishop Leonard Fairley and Disaster Response Coordinator Jim Morse stressed the importance and advantages of the connectional nature of the United Methodist Church.

But it goes way beyond the UMC. Morse and his various district coordinators who comprise the Kentucky Annual Conference’s Disaster Response Ministry are part of VOAD, the Volunteers Active in Natural Disasters. That means that during a disaster, United Methodists led by UMCOR, the United Methodist Committee on Relief, end up serving closely with 60 other organizations, among them the International Red Cross, the Southern Baptist Convention, Mennonite Disaster Service, Presbyterian Disaster Assistance, Catholic Charities USA, and Latter-Day Saint Charities.
And that doesn’t even include the various local, state and national government agencies and emergency responders.
During stops at the Methodist Mountain Mission and several UMC churches, Morse and Fairley reinforced the importance of both communication and the importance of coming together during an emergency. UMCOR strongly believes that cooperation is a crucial part of a successful response to a disaster.

“That takes on a difference face with different disasters,” Morse said in an interview, adding that no one group is going to be able to do everything. “In disaster response, we can’t afford to be a silo.” One of the stories he related at different stops on Aug. 5 was a request from Clay County Emergency Management for 500 flood buckets. Methodist Mountain Mission didn’t have enough, but through VOAD, Morse knew that the Latter-Day Saints had delivered 2,000 buckets to the Community Center in Prestonsburg, which the Christian Appalachian Project was operating. The Mountain Mission provided a truck, and they got the 500 buckets delivered.

(Hindman UMC also initially received some LDS flood buckets, church member-volunteer Linda Gayheart said. Fairley’s group brought about three dozen on Aug. 5, then as promised, Mountain Mission delivered another 300 on Aug. 6.)
Morse said he believes the Conference is gradually getting better at responding to disasters, partly by planning for them before they happen. Things go much more smoothly if local churches establish their own disaster response ministry, which includes forging relationships with local first responders.

“I like to think that we’re getting better,” he said, adding that one big reason is because churches recognize that disaster response is not just a response – it’s also a ministry.


Watch the video story by the Kentucky Annual Conference about this trip.
Visit the Photo Gallery to see more images related to this story.