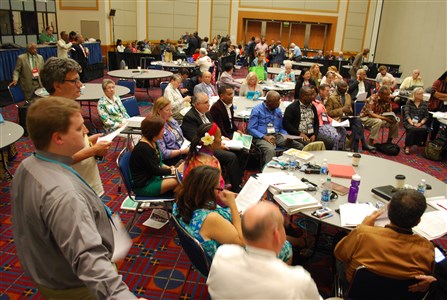 For the first time ever, due to a change enacted by the 2016 General Conference, the statistics used for calculation were derived from annual conference journals submitted to the General Council on Finance and Administration (GCFA) by annual conference secretaries.

“Extraordinary effort and innovation on the part of Commission staff, the staff at GCFA and other general agencies and annual conference leaders resulted in the collection of 100% of the necessary journals from around the world in less than ten months,” said the Rev. Gary Graves, secretary of the General Conference. “This was accomplished while also verifying data for five new annual conferences created during the 2016 sessions of the Africa, West Africa, and Philippines Central Conferences.”

Delegates to the 2020 General Conference will be representative of the five jurisdictions and seven central conferences throughout the world, as well as churches with which The United Methodist Church has a concordat agreement.  The 862 delegates are distributed as follows:

About General Conference
General Conference is the top policy-making body of The United Methodist Church. The assembly meets at the beginning of each quadrennium to consider revisions to church law, as well as adopt resolutions on current moral, social, public policy and economic issues. It also approves plans and budgets for church-wide programs for the next four years. General Conference 2020 will take place May 5-15, 2020, at the Minneapolis Convention Center in Minneapolis.