‘Delegation in the District’ meetings underway 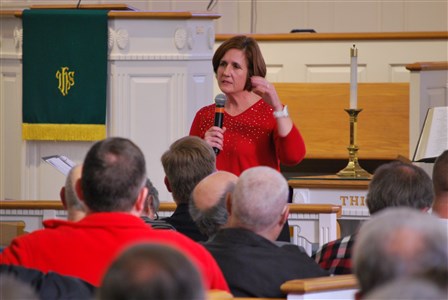 HOPKINSVILLE, Kentucky – More than 400 people attended the first of nine “Delegation in the District” meetings on Sunday, Feb. 16, at St. John (Hopkinsville) in the Pennyrile District. Revs. Tami Coleman and Matt Seel led the informational session and were supported by other members of the delegation.

Seel opened the session with prayer, then he and Coleman covered information about proposals that have been submitted for consideration at General Conference 2020. They passed out a chart that outlined the various proposals and noted that the authors of all of the proposals, with the exception of the “New Expressions Worldwide” (UMForward), have now put their support behind the “Protocol of Reconciliation & Grace through Separation.”

They went in-depth outlining the specifics of the Protocol: In addition to information about the Protocol, Coleman and Seel shared information on how proposals are submitted to General Conference along with timelines of when thing should be submitted.

They also shared some history around what the Book of Discipline says about human sexuality and how that issue impacts clergy rights.

Here is a list of upcoming events, please try to attend one that is close to you.

DELEGATION PRAYER TEAM
You are invited to join the  delegation  every evening at 9 pm (ET)/8 pm (ET) as they join together in prayer for the General Conference and as they represent United Methodists in Kentucky. They invite everyone who can to join them from wherever you are. Thank you for your participation.