GBCS Board of Directors Release Social Principles to the Church 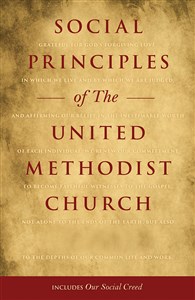 At its final meeting of the quadrennium, the board of directors of the General Board of Church and Society (GBCS) introduced the Revised Social Principles to entire church.

The document is now pending approval of the 2020 General Conference.

“Today is the culmination of an eight-year journey that began when the 2012 General Conference first called the General Board of Church and Society to revise the Social Principles to become more globally relevant, theologically sound, and more succinct,” said Bishop Sally Dyck, resident Bishop of the Chicago Episcopal Area and President of the board of directors. “Church and Society faithfully stewarded the process, fulfilling the mandate of the General Conference.”

The document is available to in seven languages for the whole church to read and discuss here.

The new document responds to General Conference by consolidating the six sections into four. The principles in the Nurturing Community are incorporated into the Social Community, while principles from the World Community section are integrated throughout.

Each section is introduced by relevant Scriptural passages and excerpts from John Wesley’s writings.

First adopted by the United Methodist Church in 1972, this is the first time the entire Social Principles document was revised as a whole. During this revision, United Methodists from the Central Conferences participated actively throughout process, offering specific recommendations on how the document could be a resource for ministry in congregations across Africa, the Philippines and Europe.

“We are delighted to see that the UMC Social Principles have been revised in the context of the unification of the United Methodist Church at the global level,” said Bishop Daniel Lunge Onashuyaka, resident Bishop of the Central Congo Episcopal Area and member of the GBCS board of directors. “All sensibilities have been included in this context to enable the unity of the church. This brings a lot of hope for the upcoming General Conference.”

The writing team included over 50 members from Central Conferences in the Philippines, the Congo, West Africa, Central and Southern Europe, and Northern and Eurasia, in addition to the five U.S. Jurisdictions. Thousands United Methodists crossed borders to read and give feedback on draft versions of the document.

“The revision process was a spirit-filled process, open and inclusive of many communities, cultures, and contexts from around the world,” said Susan Henry Crowe, General Secretary of GBCS. “Prayerful dialogue and consensus guided the revision. This truly United Methodist process showed the church at its best.”

To read the Revised Social Principles in one of seven languages, please visit www.umcjustice.org/sp2020.