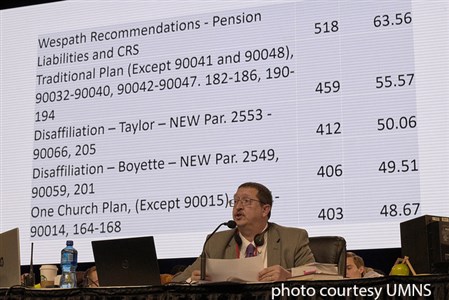 the process on Sunday of working through 78 petitions related to matters concerning human sexuality and the future of The United Methodist Church. This work stood out as members of the Commission on a Way Forward and the Council of Bishops prepared the more than 800 delegates for their task by encouraging them to seek unity in the church.

The deliberations included the long-expected prioritization process that would provide the agenda for the legislative committee to work through the petitions. The  process allowed delegates to rank the petitions based upon priority.

Petitions were, in most cases, grouped together during the prioritization process. Some petitions were separated to be considered individually. The prioritization plan was suggested by the Commission on General Conference as a way to make the most of the limited time for the special session. However, the grouping of petitions was conducted by the Committee on Agenda and Calendar.

“It was a great idea,” said Rev. Bill Arnold in reflecting on the process. “I thought that it went very smoothly.” Arnold is co-chair of the Kentucky delegation.

Two pension-related petitions, which are recommendations by Wespath, were the highest-ranked petitions in order of priority. Petitions related to the Traditional Plan, two separate disaffiliation plans, and the One Church Plan were also among the top five priorities. The Connectional Conference Plan, the third submitted by the Commission on a Way Forward, was considered a low priority by the delegates.

The pensions’ petitions were approved by the legislative committee to go forward to Tuesday's plenary session. One petition (90016) would ask churches that leave the denomination to pay a portion of its annual conference's unfunded pension liability. The second (90017) would provide clergy who leave the church some retirement benefit.
.

These were the only two petitions the legislative committee heard Sunday before Rev. Joe Harris sought and received a motion to adjourn early for the evening. Harris, a delegate from the Oklahoma Annual Conference who was elected earlier in the day as the committee’s chair, said that it would be hard for the committee to take up further plans with the limited amount of time left in the day’s session.

Monday’s legislative committee work will begin with petitions related to the Traditional Plan.

Prior to the beginning of the legislative committee work, delegates heard a report from the Commission on a Way Forward. The report emphasized key elements of the three main plans and how they promoted unity within the denomination, while also sharing how members were able to work through their differences.

“We managed to stay engaged in ways that made us remain committed to the work and one another,” said Rev. Jorge Acevdo, a member of the Commission on a Way Forward.

Three members of the commission – Jasmine Smothers (One Church), Mazvita Machinga (Connectional), and Jessica LaGrone (Traditional) – spoke on behalf of the plans. Each focused on how the respective plans would provide for unity and advance the mission of The United Methodist Church.

However, it was clear that members had a different idea of what unity looked like. Unity for Smothers and Machinga came as the church shared a common core identity and worked together across various differences, while LaGrone said unity came through doctrinal matters.

The desire for unity came as Ken Carter, president of the Council of Bishops, made it an emphasis for his opening sermon Sunday morning. Carter invited the delegates to imagine God doing something new within the UMC through this special session.

“Could this be three days where Jesus resurrects us and raises us to a new life?” Carter asked.

A look ahead to Monday

General Conference is expected to begin at 8 a.m. CST with worship before legislative work resumes. The conference must conclude no later than 6:30 p.m. CST Tuesday.

Rev. Shannon Blosser is the pastor of Ogden Memorial United Methodist Church in Princeton. He is also a member of the Kentucky Annual Conference’s Communications Team. He is live-tweeting from St. Louis at @ky_umc and @shannonblosser.