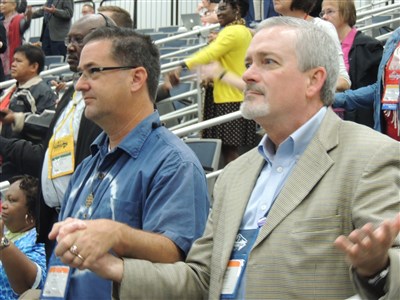 Morning worship began with the Cherokee Choir of the Oklahoma Indian Missionary Conference blessing the body in song.  Afterwards, the worship leaders, bishops and missionaries processed in, coming in from all entrances. While singing. “We've a story to hear from the nations that shall turn our lives upside-down.”

Bishop John Yambasu , from the Sierra Leone Episcopal Area delivered his sermon titled “Passion for Compassion.” His sermon reminded us to “Go to the lost sheep and proclaim the good news.”  Bishop Yambusa said that the operative verb is – “Go”. That we are to “Go” outside the four walls of the church. “Go” outside of yourself. “Go” out into your neighborhood’s. “Go” out into the world. Let the world become your parish. “Go” and rescue the perishing “Go” and care for the dying. Yambusa stressed that as we go we must do so with passion, but even more, we must do it with compassion.

As part of the opening worship service, twenty-nine GBGM missionaries were commissioned. It is the first time a new missionary class has been commissioned during the general conference session. Bishops Hope Morgan Ward, Hee-Soo Jung and Yambasu, presided over the commissioning.
During the morning plenary session the body recognized sixteen bishops that are retiring from active service September 1 of this year. Bishop Lindsey Davis from the KY Annual Conference was one of the bishops honored. Bishop Davis is in his twentieth year of service as an episcopal leader in our denomination.

During lunch, the KY delegation had an informal get together with episcopal candidate, Sky McCracken of the Memphis Conference.

The General Conference also voted to withdraw United Methodist membership from the Religious Coalition for Reproductive Choice. The UMC was a founding member of the organization in 1973. The United Methodist Board of Church and Society and United Methodist Women are currently members.
Delegates overwhelmingly approved a resolution calling on United Methodist agencies to raise awareness about the harm caused by sports teams that use mascots or symbols that disrespect Native Americans.

The petition that passed Thursday, May 19 had been amended in the Discipleship Committee, deleting language that would have called on United Methodist groups not to have meetings in cities that have sports teams with such mascots or symbols.

Among the other special observances were the 200th anniversary of Bishop Francis Asbury’s death;  the 60th anniversary of the ordination of women; the recognition of retiring Judicial Council members; and the report from the Committee on Peace concerning the Korean Association of the UMC.

During the evening time of devotion, bishops and spouses that have died since our last general conference session were memorialized. Among the honored dead were two former Kentucky bishops; Bishop Robert Morgan, who died in March 2014 and Bishop Paul A. Duffey who passed in March of 2012.