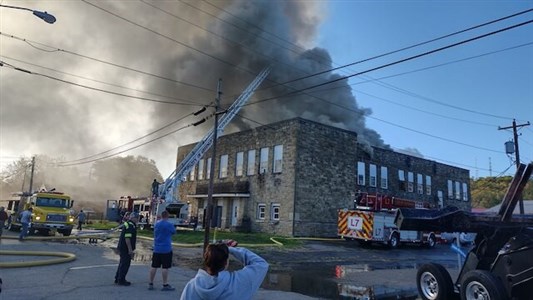 When fire broke out in a historic apartment building in Greenup, Kentucky, early on Oct. 13, the members at Greenup First UMC didn’t hesitate to step up to serve as the hands and feet of Jesus.

“It’s just been incredible the way the church and the community have wrapped their arms around the people who lost everything,” said Rev. Dr. Nancy Preston, who serves as a part-time deacon there in addition to her role as campus director of Morehead University’s Ashland campus. Greenup and Ashland are situated along the Ohio River, in the Kentucky East District.

In a Zoom interview Wednesday, Oct. 28, Preston recalled getting ready for work that morning when text messages on the church prayer chain “started going crazy.” Fire had broken out at the Stoneside Apartments, just a block from the church.

Media reports said flames were shooting through the roof of the building. Most people were still asleep when the fire started but miraculously were able to escape. Preston said one person was injured, but not seriously.

WOWK-TV in Huntington, West Virginia, quoted a fire department spokesman who said the building dates to the 1940s and was originally a school before it was converted to a 20-unit apartment building. Sixty to 70 people lived there, the TV station reported.

Preston said that within a half-hour of the fire breaking out, a prayer went out on the church prayer chain, and she reached out to members about opening their building to provide whatever assistance they could. 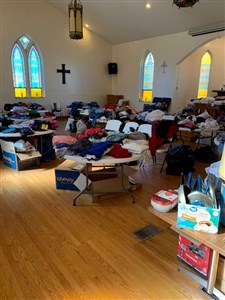 When she returned from Ashland later that day, she found the church doors wide open. The old sanctuary was piled high with clothing and other donations. Church members were there sorting through the donations, collecting information from the displaced apartment residents and serving food. The Red Cross had been provided space in a room inside the church.

Many of the apartment residents were older and some were disabled. One family that had arrived with their pet birds even got bird food that had been donated, she said.

“It was just amazing to me to see what all the people were doing,” Preston said.

Within the next few days, contributions from church members, as well as other churches and community organizations, continued to come in – more clothing, toys, mattresses and money. Just in the first couple of days, nearly $22,000 was raised, and the church set up a special account for the donations. It has allowed them to provide every impacted family $500 for immediate necessities, such as cellphones and eyeglasses lost in the fire.

“God has just been so good to us,” Preston said. “Every need that we’ve seen has been met.”

Only a few children lived in the apartment complex, so many of the donated toys are going to area agencies. Thanks to the community’s generosity, “some kids are going to get a great Christmas,” she said.

As of late October, every family but one has been relocated to a new apartment, she said. 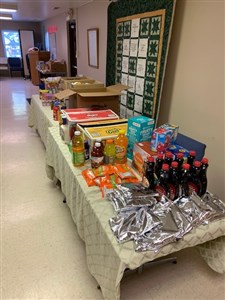 She said that she and Rev. Ronnie Highland, the other clergy member assigned at Greenup First, are blessed to serve at a church that is missionally driven by its members. The Ashland-Greenup area suffers from high unemployment and substance abuse, and the church is very committed to helping people in need, she said.

“I’m so proud of my congregation. Truly, all they were doing is following their calling. That’s just totally cool.”

Photo of building on fire provided by WSAZ-TV